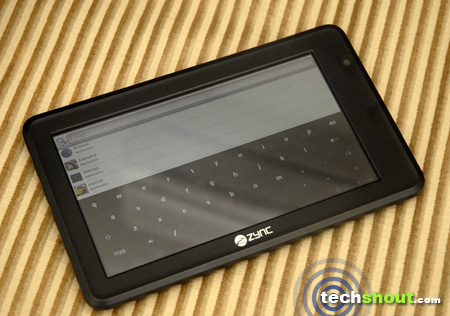 We’ve got the Zync Z990 over for review, a little more than a week since its launch. Yes, we haven’t wasted any time at all in getting hold of this offering. And why wouldn’t we? It’s not every day that you find a tablet with the Android 4.0.3 platform straight out of the box. To top that off, the India-based manufacturer has affixed it with a budget-friendly price tag, something the country’s been seeing quite a lot of lately. Well, the promising factors appear sweet, but that’s just the same with every device rolled out nowadays. So read on if you’re curious to know whether this Ice Cream Sandwich treat meets up to its expectations or is it going to be just like any other inexpensive Android device floating around the market. We’re hoping for the best. 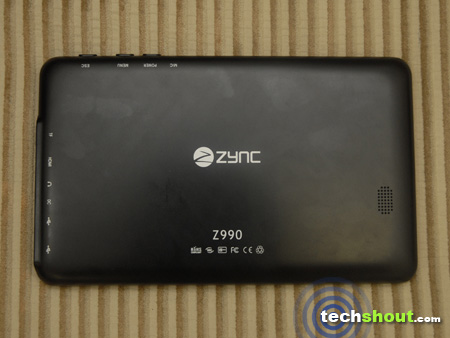 On the specifications front, we’d usually expect nothing out of the ordinary from most low-cost tablets. But the Zync Z990 is somewhat different. As we’ve already pointed out, the tablet is acclaimed to be the first ICS tablet to launch in India. Well, we hate to be the bearers of bad news, but this tablet isn’t alone. The Xtab A10 from NGX Electronics came out around the same time flaunting similar specifications, including ICS and a comparatively lower price tag. The Z990 encompasses a 7-inch TFT capacitive display with resolutions of 800 x 480 pixels and 4GB of built-in storage as well as 1GB of RAM. In cases of higher memory requirements, Zync has thrown in a microSD card slot supporting up to 32GB and a full sized USB port for hooking up external storage devices and peripherals. For computing power, the company has employed a 1.2GHz single core processor. However, our tests indicate a 1GHz clock speed instead of the specified frequency. On the connectivity front, the tablet comes in a Wi-Fi-only variant for now and supports external 3G dongles. There’s also a G-Sensor for motion-based gaming. All in all, the specifications sheet claims it to be a decent pick. But, we aren’t satisfied just yet. 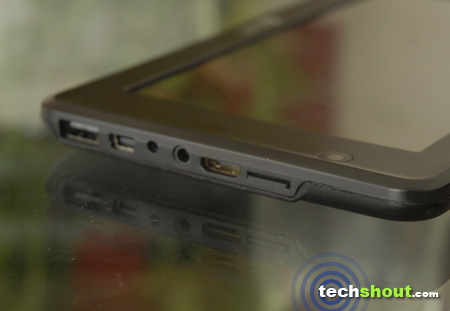 Coated in black, we received the device in a well designed package with a few companions including a pair of earphones, a USB extension and a mini USB cable as well as a lycra sleeve pouch and a charger. The Zync Z990 comes dressed in a compact and portable form factor. Slim and lightweight as it is, the material used to craft out the tablet feels fragile. A drop or 2 might just be enough to land a crack on the rear panel. Churning out inexpensive slates might be a tough job and maybe, hard plastic casings are a viable way to cut down the cost whilst maintaining a sturdy appearance. Engraved into the front is the 7-inch display that’s accompanied by the Zync branding and a 0.3MP camera, whilst the rear sports a stereo speaker system. Most components are allocated to the side-panels. On the lower part, we ran into a USB port, followed by a mini USB socket, an AC charger input, a 3.5mm audio jack, a mini HDMI port and a microSD card slot.

Being powered by the Android 4.0 OS, the tablet shouldn’t require any physical buttons. However, the menu and escape keys on the right take on the tasks of accessing the options menu and reverting to the previous screen, respectively. There’s also a power button and a minute opening for accessing the reset key. In the rush of delivering these aforementioned components, Zync has apparently forgotten a few vital offerings. And if you haven’t guessed by now, it’s missing the volume controls. If the Android UI was natively capable of allowing users to adjust the audio levels through the UI, manufacturers would have killed these two physical buttons a long time ago. But that doesn’t seem to be the case here. Even so, users would have to repeatedly unlock the device to set the volume. 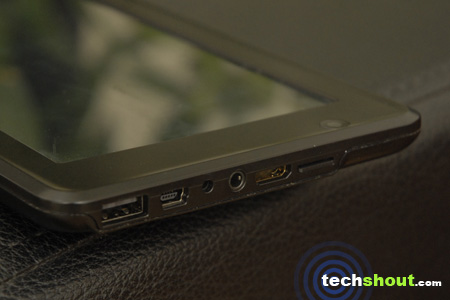 Unlike most low-end devices we’ve gone hands-on with, the Zync Z990 is apparently beyond ordinary in certain aspects. For completely unknown reasons, we decided to drop in a few Tegra-optimized games, just to try our luck. And to our surprise, they actually worked. In fact, most mid-ranged and casual titles ran smoothly without any problem, but it took a heavy toll on the battery. We noticed a 20% drop in just 5 minutes of intense gaming. The front facing camera is decent enough for snapping up self portraits and video calling. It even houses a panorama mode for wide-angle captures. As far as the video playback and image quality aspects are concerned, washed up and faded pictures in the gallery was what we acquired while reviewing the gadget. As for the battery life, we derived a little over 4 hours of gaming and browsing as well as streaming content on Wi-Fi and listening to music.

We never even expected graphically demanding games like RiptideGP to run smoothly on low settings.

For the price tag it flaunts, the Z990 is quite the contender in the budget-friendly tablet segment.

The lack of dedicated volume buttons left us lost and confused.

The interface needs to be worked on. The icons appear awkwardly placed and inaccessible in landscape as well as portrait orientations.

To put it all down simple and straight, the Zync Z990 makes for a decent tablet. Performance-wise, it delivered way more than what we first anticipated before kicking off the review, and even better than most other budget-friendly slates out there. Well, there’s a lot of room for improvements. If the manufacturer would have polished the UI a little and delivered the necessary features as well as components, we’d gladly give it a rating higher than its current 7.6 out of 10. You can pick up a unit for Rs. 8,990 in India.