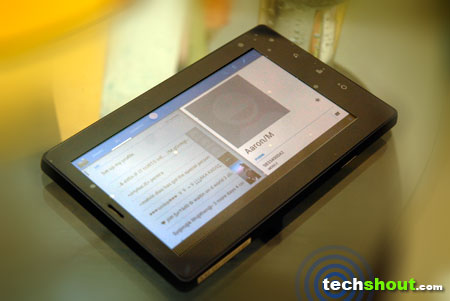 It’s been more than a fortnight since the Zync Z-999 Plus tablet made its debut in India and we’ve got it over for a full scale review. Unlike the Z-990 which we went hands-on with towards the end of March, this Ice Cream Sandwich slate packs in voice calling capabilities. The company has even bumped up the specs as compared to its predecessor, the Z-999. All in all, it sure looks like a pretty decent ICS tablet on paper. But the main question is – How well can it perform in the wild? Now that’s precisely what we intend on finding out. 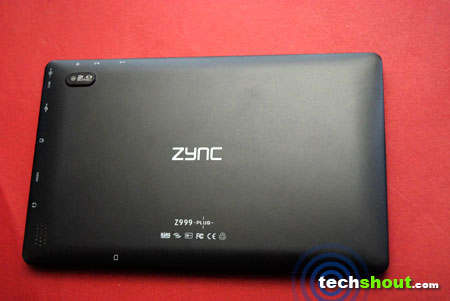 The Zync Z-999 Plus is quite appealing when it comes to the design. On arrival, we unboxed the device with a handful of accessories such as a sleeve pouch, a screen guard, a set of earphones, a USB cable and an AC adapter. Coated in a shade of black throughout, the tablet has a sturdy appearance portrayed through the hard plastic casing which flows along the sides and rear. Featuring a rectangular form factor, the corners aren’t curved much and help portray a rather stylish appearance.

Surrounding the 7-inch LCD on the front is a thick bezel with 3 capacitive touch buttons and a 0.3MP camera on the lower part, while a glass coating spreads over the entire surface. Excluding the push-to-release SIM housing, volume controls and the power button that are situated on the sides, almost every port and button is allocated to the lower end. These include a 3.5mm audio jack, an HDMI out socket, a microSD slot, a mini-USB port and lastly, a charging port. Flip over to the rear and you’ll be presented with the Zync branding at the center, while a 2MP AF camera bulges out from the corner. 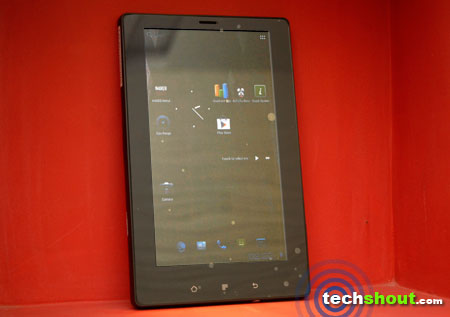 Now than you know how the Zync Z-999 Plus looks on the outside, we’re going to take a quick peek at what the company has embedded within. Beneath the 7-inch capacitive multi-touch LED display proffering resolutions of 800 x 480 pixels, and the hard plastic shell surrounding the tablet, the specifications sheet claims the existence of a 1.5GHz processor that’s based on the ARM v7 architecture and 512MB of RAM. There’s a Mali 400 GPU in tow for 3D graphics and Open GL 2.0 support. 8GB of integrated storage is made available for basic hoarding needs too.

If the memory requirements were to increase, an additional 32GB of storage can be thrown in through the microSD card slot. You’ll even be treated to various expected components such as a 2MP AF rear camera, a G-sensor, stereo speakers and a built-in microphone. On the connectivity front, the tablet packs in a SIM card slot supporting 3G and EDGE GSM networks, Wi-Fi and Bluetooth with A2DP. Last on the list is the 4200mAh Li-ion polymer battery that delivers the juice to power up the slate. 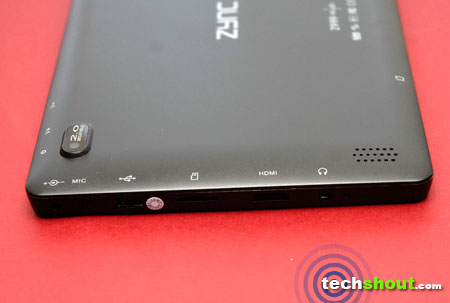 We’re going to be tactlessly upfront about the Zync Z-999 Plus’s voice calling capabilities. Firstly, the speaker above the display is very soft, so much so that we barely heard anything said from the other end, with just moderate levels of ambient sounds being present. What’s more, it’s really not comfortable holding up devices as large as this tablet to your ear for long. If there’s anything Zync needs to boast of here, it’s certainly not the voice calling capabilities proffered by the slate. Although the display makes images and videos look pixilated, HD playback is quite smooth. Based on the results we derived through the AnTuTu Benchmark application, the slab scored a total of 2999 points. That’s higher than the Galaxy S and lower than the Nexus S. 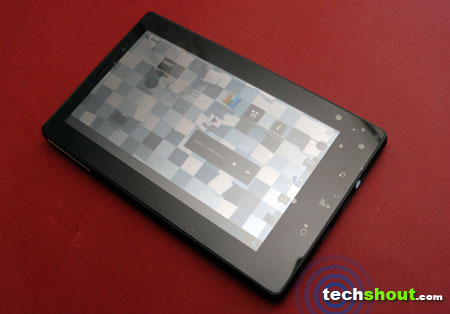 According to the specifications sheet, the ARM processor within the tablet is supposedly clocked at 1.5GHz. However, numerous system utilities and benchmark apps listed the device to have a CPU frequency of 1GHz only. So where’s the extra 500MHz gone, Zync? We even actively monitored the CPU usage for confirmation. We tried our luck with demanding games like GTA III. Well, the outcome wasn’t surprising at all and you’d probably have guessed it by now. On the bright side, other titles such as Angry Birds, Asphalt 5 and HAWX run with no problem whatsoever. The total battery life is approximately 4.5 to 5 hours on heavy usage which includes a constant active Wi-Fi connection with music playback and surfing the web.

The display affixed to the Z-999 Plus is really responsive and navigating through the interface or menus is smooth.

Compared to most budget-friendly tablets we’re reviewed, this one’s on the top tier for HD playback.

The device gets pretty good network reception on both 3G and EDGE.

It feels pretty weird sticking a 7-inch slate to the ear when answering or making calls. To top it off, the speaker audio is really soft and not clear at all.

Zync really needs to glam up the UI to deliver a much better user experience.

On the performance front, the tablet isn’t quite capable of running graphically enriched games that work smoothly on devices with lower configurations.

The slate has a mini-USB port when manufacturers around the world have started to standardize micro-USB ones.

For the price tag the Zync Z-999 Plus flaunts and the performance it’s capable of delivering, we certainly feel it’s got some good potential in the affordable segment of tablets. But the company still needs to work out a couple of things like better implementation of the Android platform as well as a much louder and clearer speaker for calls, for starters. Available at a price of Rs. 11,990 in India, we’ve giving this ICS slate a 7.3 out of 10 rating.