ZTE has introduced a brand new smartphone range under the Blade Q brand. The new lineup comprises of 3 devices, each carrying different specifications and screen sizes. Apart from this, the company has announced that the previous Blade series which includes the Blade 3, Pro, V and G, has now gone on sale in 23 more countries across Europe.

First, we have the Blade Q smartphone which is a 4.5-inch device that proffers visuals in FWVGA resolution. The handset is 9.5mm thick and it packs an 1800mAh Li-ion battery. There’s also a 0.3MP camera on the front for video calling. The next handset is the Blade Q mini which as the name suggests, is a compact version of the former. 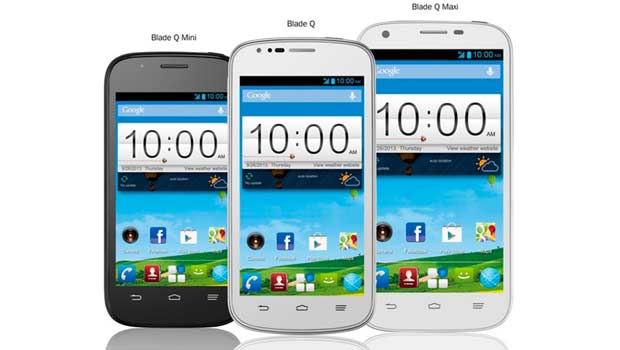 This smartphone falls in the 4-inch category with WVGA 480 x 800p resolution. It has an 8.9mm slim profile which accommodates a 1500mAh battery. The third and last member is the Blade Q Maxi which measures 5 inches wide. To get things up and running, a 2000mAh battery has been incorporated, while a 0.3MP camera sits pretty on the front.

The trio of Blade Q smartphones shares various common features. First is that they all run on Android 4.2 Jelly Bean. The company hasn’t mentioned anything about exclusive apps, but it has stated that various Google and cloud services including Evernote and Dropbox have been pre-loaded. An office suite will be available out of the box as well.

Each handset is powered by a 1.3GHz dual core MTK processor and packs 1GB of RAM as well as 4GB of storage. For connectivity, there’s 2G GSM and 3G network support, GPS, Wi-Fi 802.11 a/b/g/n and Bluetooth 4.0. Lastly, a 5MP AF rear camera can be found on all handsets.

The Blade Q lineup is expected to go on sale starting with Europe, albeit no price or release date details have been divulged.