While India and other countries are patiently waiting the Nubia Z7 series to arrive, ZTE is planning to launch another high-end smartphone dubbed Star 2 with flagship-class specifications. The handset will of course, be headed to China first and its availability in other locations is highly doubtful.

Well, the ZTE Star 2 has to be made official first, but that event shouldn’t be too far away as the phone has been certified at TENAA. Obviously, the regulatory body has published images and specs of the smartphone. Design-wise, the handset basically follows the same styling as other flagship phones from the OEM. 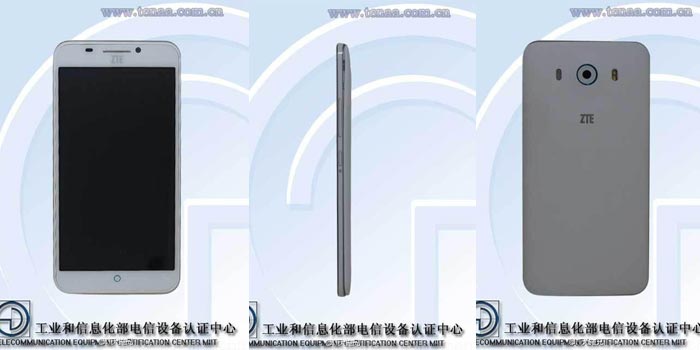 As you can see in the image above, the front sports the traditional Nubia series-inspired circular home button and a ring can be found around the camera on the rear as well. The handset doesn’t appear to be on the slim side and it looks pretty much identical to the phablet that was spotted back in November.

The specs sheet hints that the new phone could just be an upgraded version of a previously model. Both devices offer a 5.5-inch 1080p display and are powered by a 2.5GHz quad core Snapdragon 801 SOC. The internal memory is also the same at 3GB RAM and 16GB flash storage. What’s different is that this phone will have a 13MP rear camera, while the earlier one showed up with an 8MP shooter.

Here’s a roundup of the ZTE Star 2’s specifications:

According to a report from GizmoChina, the ZTE Star 2 is expected to have a retail price of around 1999 Yuan in China, approximately US$320 after conversion.