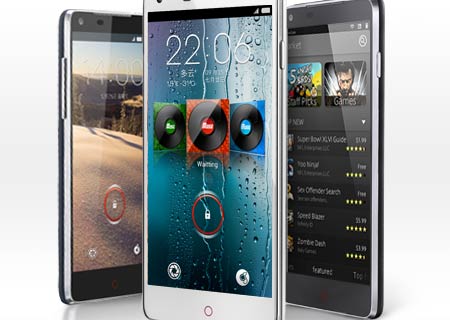 The ZTE Grand S will reportedly be just 6.9mm thick, a spec which makes it even slimmer than the iPhone 5. We live in an age where all the big manufacturers are slapping large screens with displays of high resolution onto their phones, and in keeping with this trend, the aforesaid device is supposed to offer visuals in full HD.

The Grand S is oddly not the only smartphone from ZTE to boast of these high-end specifications. In fact, the Chinese multinational company just recently unveiled the Nubia Z5 with its own set of impressive attributes. Among them we find a 2MP secondary, front-facing camera and a 5-inch IPS display panel.

Coming back to the smartphone at hand, it should also pack under its cool white exterior a 13MP camera, which causes the rear panel to have a sort of humped appearance, much like the Nokia 808 PureView. 5 inches of screen throwing up visuals in 1080p is practically the only other thing known about the phone.

At a time when OEMs are bouncing off the walls to keep a tight lid on information regarding in-development and yet unreleased phones, it seems that ZTE is happily revealing things officially. As Unwired View reports, this piece of news about the second device from said OEM comes by way of MyDrivers, a Chinese web site which has also cast speculation on the device’s price.

Not much else is known about the device, but considering the Nubia Z5 is supposed to arrive with a 1.5GHz quad core Qualcomm Snapdragon S4 Pro processor, 2GB of RAM and 32GB of internal storage, it wouldn’t be to too far off to expect something similar from this newest reveal.

The ZTE Grand S is supposedly expected to retail at ¥2,800. This speculated pricing puts it a good ¥600 (about $100) under the Nubia Z5 which itself is reported to hit Chinese customers at ¥3,456 (or approximately $555). We can’t be sure how close this expectation is to the actual cost of the device, but the phone is set to be unveiled at the CES in January 2013, so we should know more then.