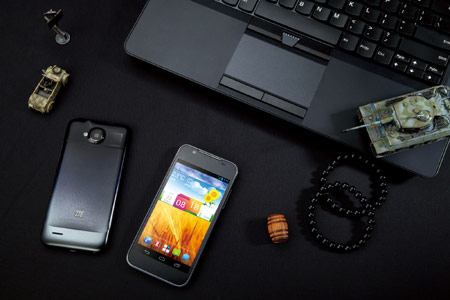 The ZTE Grand Era U985 has been announced at the PT/Expo Comm China 2012. It tries to grab a piece of the pie laying claim to the title of the slimmest quad core smartphone in the world. The phone is to go on sale in China shortly.

It boasts of a thin form factor with an average thickness of just over 8.5mm and at its slimmest portion is apparently just under 8.0mm thick. The company calls it a ‘ historical breakthrough’ in Chinese handsets, and says it is at present, the thinnest quad core handset.

The ZTE Grand Era U985 operates on the Android 4.0 platform and features a ‘PC-class’ Nvidia Tegra 3 quad-core CPU. The camera it carries along is an 8MP auto focus HD flasher which complements the phone’s 4.5-inch HD retinal screen which can display output at a resolution of 1280 x 720. To top it off, it is also capable of 3D acceleration.

“The Grand Era has opened the door to the quad-core era for ZTE smart phones,” ZTE Executive Vice President, He Shiyou, affirmed. “We believe these products will produce a butterfly effect across the industry, domestically and abroad.”

Those products that He is talking about refer to the Grand Era V985 and the Grand Era LTE, both quad core smartphones that the company will also be displaying at the expo, along with the Grand V970 and Grand U930.

In addition to what users will get in terms of the Grand Era U985’s hardware capabilities, ZTE has pre-loaded the device with its own security suite called Palm Manager. This includes both hardware and software components protecting users’ information by monitoring permissions of installed apps.

The ZTE Grand Era U985 price has not been given a mention yet, but it should be made available in China in the coming days.