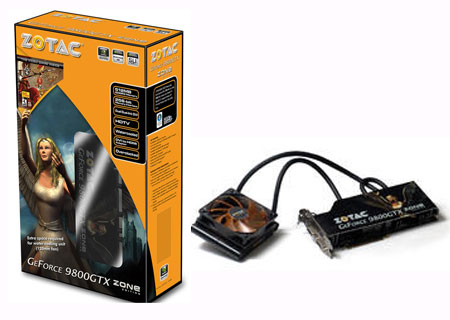 The water-cooled GPU graphics card has been officially released. The ‘ZOTAC GeForce 9800 GTX ZONE Edition’ is aimed to provide a silent and powerful processing business.

The card is powered by NVIDIA GeForce 9 series graphics power and PureVideo HD video processing technology. The card is a power-packed delivery package with DirectX 10 and OpenGL 2.1 titles. What’s more? You can have a virtually noise-less computing experience with all this!

Not to forget, the new graphic card, unlike the standard NVIDIA GeForce 9800 GTX based graphics cards, has higher speed clocks of 700 MHz, 1700 MHz and 2250 MHz for core, shader and memory clocks respectively.

The ZOTAC GeForce 9800 GTX ZONE Edition will be available in stores by the end of June and is priced at $530 (approximately).