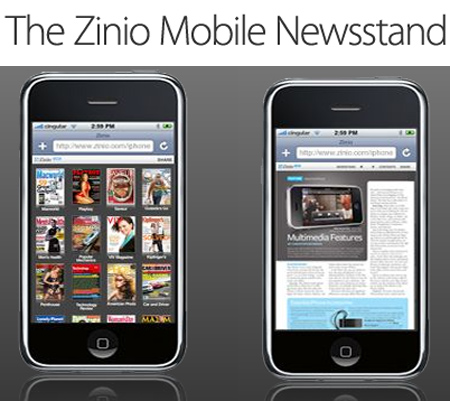 For those who are wondering what this is all about, the Zinio Mobile Newsstand offers mobile users a new way to read their favorite magazines. At the same time, it also offers publishers a new way to reach their mobile audiences. It was developed by Zinio’s research and development group called Zinio Labs.

Magazines available in the Zinio Mobile Newsstand are exact replications of the print versions with razor sharp display plus added interactivity and sharing capabilities.

According to Rich Maggiotto, CEO, “The iPhone is an amazing product that’s helping to take compelling content, like magazines, mobile. With its advanced touch screen technology and crisp viewing experience, Apple’s newest devices were natural for the launch of the Zinio Mobile Newsstand. Users will benefit from having their magazines in a high-fidelity, portable format that can be viewed practically anywhere.”

Users will not need a subscription with Zinio to gain access. Basically, anyone who has an iPhone or iPod Touch will be able to avail of this service.