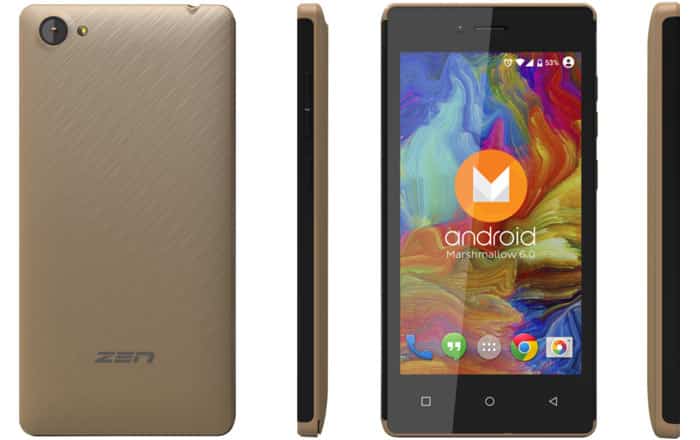 Domestic handset maker Zen Mobile has launched a brand new handset dubbed the Admire Star in India, targeting Tier-II and Tier-III cities. Like other offerings in the affordable market sector, the smartphone boasts of standard entry-levels specs with a few features here and there to set it apart from its competition.

Chief among them is an SOS feature which allows users to quickly send their location to 5 pre-set contacts in case of emergency. Such a tool has also made an appearance in other phones such as the LG X Screen in recent times. The Zen Admire Star is further distinguished by the fact that it runs Android 6.0 Marshmallow.

While it’s no Nougat, many inexpensive handsets still run on Lollipop with no hopes of ever getting the send-up to Marshmallow. Diving into its specs, the Zen product serves up its visuals through a 4.5-inch 480 x 854p screen. It gets things done with the help of a 1.3GHz quad-core processor of unknown make.

Here’s a quick look at the top specifications of the Zen Admire Star:

Users can take advantage of a paltry 512MB of RAM and 8GB of ROM for their memory requirements. They can add up to 32GB of additional space through a microSD card slot. As for its photography skills, the smartphone comes with a 5MP rear camera equipped with LED flash and 1.3MP front-facing snapper for selfies and video calls.

The Zen Admire Star is priced at Rs 3290 and should hit stores across India soon.