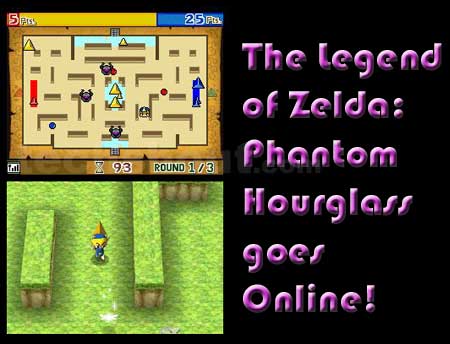 Nintendo’s Eiji Aonuma, the main man in charge of the Zelda games for a while now, has confirmed that The Legend of Zelda: Phantom Hourglass will feature one-on-one battles over Wi-Fi Connection. You will be able to play this latest Zelda game over the Internet via the Nintendo Wi-Fi connection.

The Legend of Zelda: Phantom Hourglass was shown off at the Game Developers Conference that took place last week.

The Legend of Zelda: Phantom Hourglass, yet another Zelda game for the Nintendo DS will first be released in Japan first. At the moment, the game is in the “fine-tuning and polishing stages” of development.

“When I get home, the first thing I have to do without taking any breaks at all is get into the office and see that it gets done,” Aonuma assured.

There will also be a multiplayer option in The Legend of Zelda: Phantom Hourglass, which will be presented in the form of a one-on-one battles game. Here, one player moves Link around a maze and the other, the Stalker, controls three Darknuts trying to stop him.

Besides, it was also revealed that players will also be able to take advantage of power-ups, with Link able to grab Pegasus boots to increase his speed temporarily and a shield to reflect a single Stalker attack, while the Stalker can also use Pegasus boots, tornados to block Link’s path, and another item that increases attacking power for a short time.

And if the above does not make any sense to you, then you have probably never played any of the many Zelda games, or you will have to play the game to see the magic!