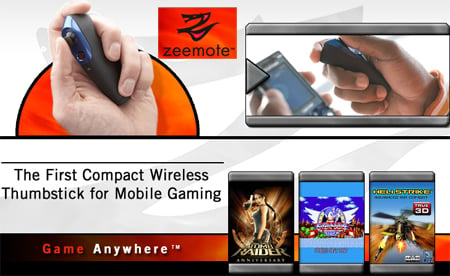 Zeemote, a creator of intuitive user interface technologies has announced the launch of the Zeemote JS1 wireless controller that enables game play on mobile phones which is closest to that of consoles!

The Zeemote JS1 controller is a small, responsive, ergonomic and wireless device. It brings mobile gaming to a fast and interactive level. At just 95x35x20mm and carrying a weight of 47g, the Zeemote fits perfectly in the player’s hand. Further, since it has been ergonomically designed, the Zeemote JS1 offered an optimized level of comfort.

It was created by the same team that developed the first force feedback joystick for PC gaming.

“Developers, operators and gamers tell us the Zeemote JS1 controller is what they have been waiting for to unleash the real potential of mobile gaming. We’re already in discussions with a number of operators and manufactures regarding bundling the controller with games and handsets,” said Beth Marcus, CEO, Zeemote.

As of now, game developers and publishers like Eidos, Finblade, Fishlabs and SEGA of America have adapted popular games like Lara Croft Tomb Raider and Sonic the Hedgehog to utilize Zeemote’s amazing new technology.