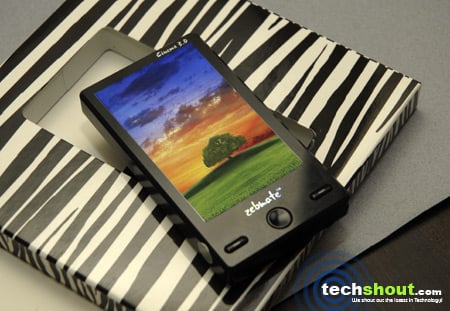 There are many jokes helping discern whether a zebra is white with black stripes or black with white stripes. Well we don’t intend solving any of the mystery but a name like Zebronics in tech world only reignited our passion for the beautifully striped animal. The company with its ‘Always Ahead’ tagline has carved a niche for itself in the PSU and cabinets terrain and there have been a few MP3 players worth noticing too. The most recent ones were the Zebmate-75 Unique and the Zebmate Cinema 3.0 with the latter under our wings lately all ready for a thorough scanning. The Zebmate Cinema 3.0 landed at our quarters for a review in an attractive bundle and here’s whether you should consider picking it up or no.

The package that wrapped in the player bore zebra stripes along the edges and was all colorful and bright in the center. It quite reminded us of spotting a zebra in the wilderness. We found ourselves ogling at the actual bundle that held the player and its accompaniments even more. Quite different, the cardboard stuck to the black and white color scheme. It had an open book shape with the Zebmate player on one ‘page’ and an enclosure that contained the charger, USB cord, neck band, cleaning cloth, carrying case and earphones as the other ‘leaflet’. A run-through the feature list on the box revealed a 4GB memory capacity and a battery that should suffice approximately 15 hours of audio and 4 hours of video in continuous playback. Supporting USB 2.0, there’s FM Radio and E-book support too.

It’s the MP3 player’s rather small form factor that managed to grab our attention as soon as we took the covers off it. Precisely, the 46g weight and 91 x 50 x 12.5mm dimensions justify it’s very diminutive profile. The player has a glossy black finishing on the front side with the words zebmate etched just below the 3.0” screen. Right under this is the circular home button in the middle flanked by the left and right navigation buttons on either side. The right edge houses the volume adjustment buttons, the sliding power on/off knob and a button sharing the return/pause functions. The USB 2.0 port and the 3.5mm headphone port are located on the lower side. The left border is bare while turning the player to its back reveals a brown colored granite effect finishing. There’s nothing really stylish about the player with only its light profile adding to its tailoring. 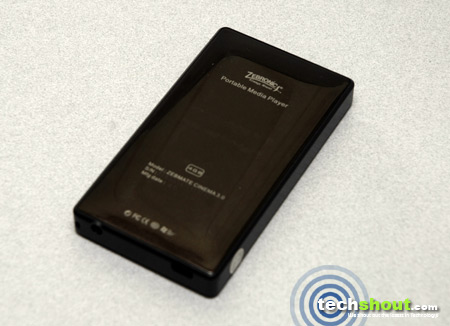 As we switched it on, we were welcomed to a rather simple and bright interface. The 260K, 400 x 240dpi resolution seems rather low if anything with the very poor quality of content being reproduced on the screen. The brightness can be set in a range of 1-5 from light to very bright though it doesn’t really impress with any particular option. The backlight timing and Light Mode (Dark/Penumbra) can be altered as per users’ preference too. In the System Setting feature there is a firmware upgrade and restorable option while you are also free to set a key lock time. With four desktop themes that can be picked for the background, the player surprised us with the wide language support it offered, right from Spanish and Italian to French besides English of course. To save the battery you can also put the player to sleep via the SleepShut Time function.

Connecting the Zebronics Zebmate Cinema 3.0 player to the PC was simple plug and play, though file transfer took more than what we expected it to. We had the player filled to the gill with music, video and images and despite packing it to roughly 3.56GB of its capacity, it performed seriously well. Detailing the memory storage however translated to just 4 video files in .avi format, 11 images in .jpg format and 11 mp3 audio files being saved. There’s no doubt it will suffice your everyday needs, but you will certainly need a memory haul should you decide to tag along the player on a long vacation. We caught up with some past episodes of the Rules of Engagement series and might we say each character kept us in splits with the player sidelining neither audio nor video quality. When in Videos, we could forward videos by time or move onto completely new videos in rather distinct manner. An option below the video playing lets you adjust the precise time you wish to forward/rewind the video by using the volume buttons. There’s a full screen view option too. Videos and images are saved by default in the landscape mode in the player.

Going onto the Music feature showed all audio files being saved and sorted automatically by Artist, Album and Genre. A Repeat Mode, Play Mode, MSEQ, EQ Sel and User EQ Setup are open for customization for music being listened to. The player delivers a more than passable audio quality though it is obviously no match for the enhanced range of MP3 players we’ve seen from Apple, Sony, Creative and others. The supplied 3.5mm earphones lodge deep in the ears and deliver good audio. While a Hold Recollection option remembers files played, it was a task trying to get a particular file in the Favorites folder. There was nothing different as such provided by the Images feature. We could zoom in and out of images while also being able to rotate them. We were through nearly half a day of continuously using the player now and the player did get slightly warm at the back. 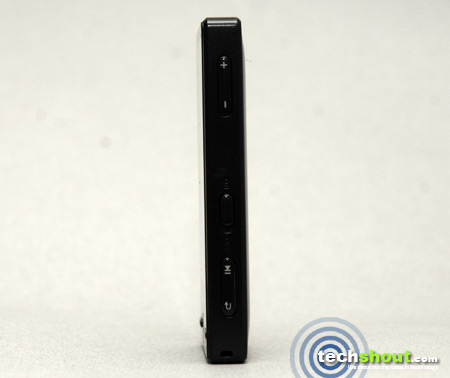 It was the Radio function that we explored next. The attribute is spruced up by a number of options and we could search and save channels manually while also being able to pick the signal receiving area from among China, India, USA, Europe and Campus Radio. We loved the fact that we could also record content straight off the Radio. A dedicated Record function also let us save the audio antics of a very surprised colleague with the file being served up in the .WAV format. Every detail of the recordings in both instances including the surrounding noise was captured right down to the hilt. You can differentiate FM recordings from normal ones with the FM and MIC prefix to the respective file names. A Calendar and StopWatch are featured in the Other Func while the Explorer folder lists all the contents of the player with the Player File, Delete File and Exit options. If you think reading an ebook is one of the most important things on an MP3 player you can use the Ebook feature. The player has been endowed with two retro-styled titles namely Gobang and Tetris that really didn’t do anything novel to hold our attention for long.

Very lightweight and is both palm and pocket friendly.

Interface is simple and clutter-free.

Difficult to get around functions with even simple ones requiring much pondering.

The infused screen is a bit reflective and not the best among the breed.

It does take some time to get used to the hard presses the buttons integrated on the player require.

Zebronics has kept it very basic and though you can multi-task, there’s no option to go straight to the feature being used. You’d have to make your way painfully through all the features from scratch to even perform an action as belittled as pausing music while you’re in the midst of a game. It will strike a chord with its good video and audio quality nevertheless. Of course there are a number of other MP3 players that may seem much better than this Zebronics offering in comparison. It does make a point though at being rather affordable with its mere Rs. 2,999 price tag and a 1 year warranty. Our rating for the Zebronics Zebmate Cinema 3.0 MP3 player is 7 out of 10.