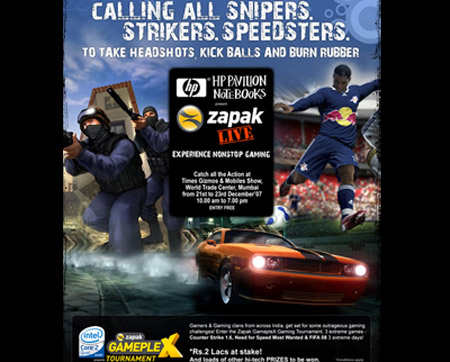 Gaming lounges seem to have caught on in India..finally! First it was Microsoft who recently inaugurated its first Xbox Lounge, and now Zapak has announced the launch of its first Zapak gameplex. It is situated in Mumbai at I-Max Wadala.

Zapak’s newly launched Gameplexes will offer gamers the chance to lounge around and play the best of international gaming titles in a perfect ambience and on well-equipped gaming PCs.

This experience will be recreated at Zapak Live, which is scheduled to take place at The Times Gizmos & Mobiles Show at the World Trade Center, Mumbai from December 21 through 23rd.

Zapak Live is being presented by HP Pavilion Notebooks while the Zapak Gameplex Tournament by Intel.

Moreover, the Zapak Live event will feature a 10,000sq. ft. Gaming Zone which will feature the 30-seater Zapak Gameplex .

Also expected to gather a lot of gamers will be the Zapak Live Tournament which spans over the 3 days and is based in popular games such as Counter Strike, FIFA ’07 and need for Speed, will have Rs.2 lacks plus other hi-tech prizes up for grabs.

According to Rohit Sharma, Chief Operating Officer, Zapak Digital Entertainment Limited, “Zapak Live was our initiative to expose those people to gaming who have already not got onto that bandwagon, apart from the ones who eat, breathe, smell and live games. It was provided the perfect setting at the Times Gizmos & Mobiles Show, which provided a similar target audience as ours, i.e. males and females in the age group of 15 to 55 years.”