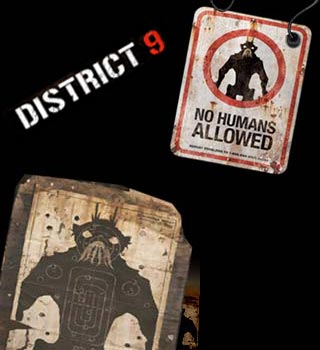 District 9 is an upcoming South African sci-fi thriller movie produced by the famous Peter Jackson who played a crucial part in films like King Kong and the Lord of the Rings Trilogy. Now Zapak.com has joined forces with the concerned persons of the movie to become their official gaming partner in India. The gaming company will hence host their official game which will be based on District 9.

The newly fashioned title enables players to take on the role of either a human or a non-human. If they choose Human, players get to be a MNU officer and patrol in District 9. to complete a particular level and advance to the next, they must shoot or arrest 20 non-humans. If gamers choose the role of non-human, they have to rebel against the MNU Corporation and the patrolling guards. Players would also need to crawl stealthily amidst the District 9 slums after curfew is announced there. They must do so to obtain the precious alien fuel canisters before the MNU can get their hands on them. As the game progresses, players can look forward to more fun and dangerous challenges.

“The movie District 9 gives us an interesting opportunity to provide a sci-fi game to our Indian audience. Zapak being the leading gaming portal in India will be able to reach out to maximum gamers in the country. We believe this game will be well accepted as it has a unique offering for our gamers,” stated Rohit Sharma, Chief Operating Officer, Zapak Digital Entertainment Ltd.

“District 9 is an internationally acclaimed film and Gross 37.4 Million USD opening weekend B.O at No 1 position and is going strong in all worldwide markets. Multivision is proud to release the film in India on September 11, 2009 and have a 360 degrees marketing strategy for it,” said Ajay Gupta – Director of Multivision.

District 9 is written and directed by acclaimed Mr. Neill Blomkap and features the likes of Sharlto Copley, Robert Hobbs and Jason Cope as part of the cast line-up. The film is adapted from a short film called Alive in Joburg. The short movie is produced by Sharlto Copley and directed by Neill Blomkamp. The storyline is inspired by the historical events that occurred in a residential area called District Six. This was located in Cape Town in South Africa under apartheid. It also seems to shed light on the current state of affairs taking place post-apartheid in South Africa. Forced removals and contemporary evictions to new ghettos is what still goes on in the country.