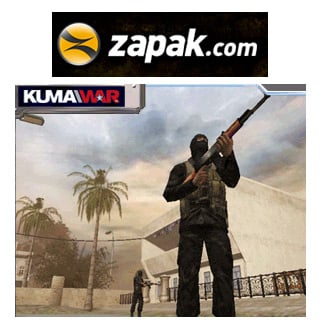 India-based gaming portal Zapak has announced the launch of the ‘Zapak Gameplex Championship’ at the Zapak Gameplex across five major Indian cities. Kicking off from tomorrow, i.e., November 23rd from 02:00 pm onwards, the Championship gives you the chance of playing games and winning exciting prizes every Friday till the 14th December, 2007.

Apart from the announcement of the Zapak Gameplex Championship, Zapak also introduced the Kuma War games in India. The company will host 5 games with more than 100 episodes which will be completely free for users to download. Client can be installed from warzone.zapak.com. These games are used to offer military training to the US Army.

The Kuma games will include games like, DinoHunters, Kuma War, Shootout, Dog Fights and Kill Fight. A new set of episodes will be released every month adding a fresh perspective to these games. These games are based on real life scenarios like Saddam’s capture, fight in Afghanistan, Osama hunt et al. Moreover, Kuma Games are known to provide military training to United States Army.

Rohit Sharma, COO, Zapak Digital Entertainment Ltd, maintained, “Strategy games are a big craze amongst avid gamers today, hence to cater to this segment and add to our already diverse portfolio of games, we are happy to launch Kuma War games in India. Kuma War games will exclusively be available with us at Zapak ensuring an exciting international experience for the target audience.”

Coming back to the Zapak Gameplex Championship, below are further details of the same: