Micromax’s Yu Televentures has been working on a new smartphone under the Project Caesar codename from quite a long time and they’ve finally settled on a name for the device – Yu Yuphoria. Sure, the moniker is hard to pronounce, but it’s quite unique and is certainly better than most branding we see on the market today.

Yu isn’t really the one to come up with the new name for the Project Caesar smartphone. The company basically held a contest where fans submitted their suggestions. Yu Yuphoria is the winning name out of 100000 entries and the brand also had choices of four other top submissions such as Yuknight, Yunicorn, Yunity and Youth. 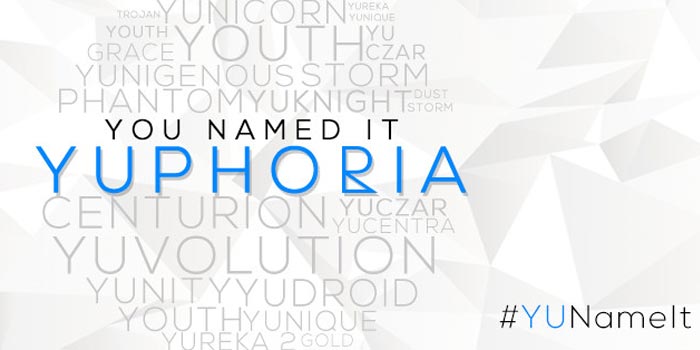 The word Yuphoria is actually Euphoria which is best described as the feeling of happiness, excitement and joy. We already know quite a bit about the handset since the company isn’t shy of tweeting out teasers or poking fun at the competition. What can be confirmed is that the device will be a mid-range one which will compete against the Redmi 2 from Xiaomi.

The display size is unknown, but the processor used here is said to be a 64-bit chipset. We could see the same Snapdragon 615 used in the Yu Yureka or the toned-down Snapdragon 410 quad core SOC. Apart from this, there will be 2GB of RAM and 16GB of internal storage. Yu has also revealed that the upcoming smartphone will be powered by the Cyanogen OS. The platform will be based on Android 5.0 Lollipop tagging along loads of customizations and other features.

The Yu Yuphoria will be officially launched sometime this month.

Facebook
Twitter
Pinterest
Linkedin
ReddIt
Tumblr
Flip
Previous articleApril 14 is when the HTC One M9 will be officially launched in India
Next articleOppo N3 pans its motorized camera towards India, available here are Rs 42990