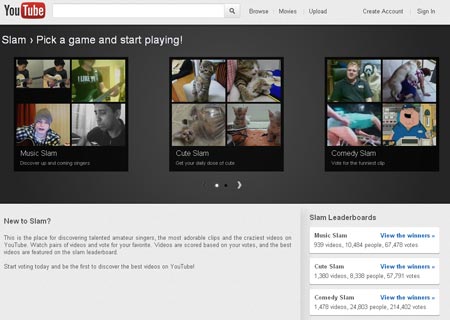 YouTube Slam is here because web users apparently don’t already spent too much time on the popular video sharing site. The guys over at Google Research and YouTube have jointly cooked up what they like to call ‘a video discovery experiment’ in which user-uploaded clips get into head-to-head battles just for fun and votes.

So here’s the deal – Google picks up two random user-uploaded viral videos and turns them against each other. And the winner is obviously determined by viewers voting for their favorite clips. A recent post on the official YouTube blog states that this new experiment, or game, will feature new content each week in Slam categories such as Cute, Comedy, Dance, Bizarre and Music.

Based on the votes cast by viewers, the Slam winner earns a spot amongst other viral videos on the leaderboards. Well, that isn’t all; users can subscribe to each channel to stay updated about each week’s top clips and even earn points in the process by predicting the winner. To get things more hot and competitive, audiences will also be able to check how they stand against other players. 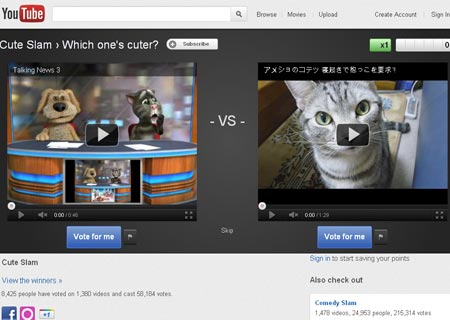 To vote for favorite videos, users will have to sign into their Google accounts first. It’s clear that Google seems to be keen on concentrating a lot of its attention towards user-generated content. Previously, the company launched the YouTube Space Lab program through which anyone between the ages of 14 to 18 years can upload their own experiments.