Windows Phone users are being deprived of a decent YouTube experience yet again as Microsoft and Google have fallen into dispute. This time around, the search giant has blocked the application from accessing the video sharing website citing that the Redmond corporation has violated the service’s terms of use. What’s interesting is that both companies are jointly designing the app, so how could this happen?

While Google has demanded that the application should be written in HTML5, Microsoft has highlighted the difficulties in fulfilling this request. So, as both companies are working on designing the tool based on the said coding language, the latter decided to publish its non-HTML5 version till the work on the collaborated one gets finished. Google noted one of the reasons behind the restriction is that the application ‘doesn’t always serve ads based on conditions imposed by content creators.’ 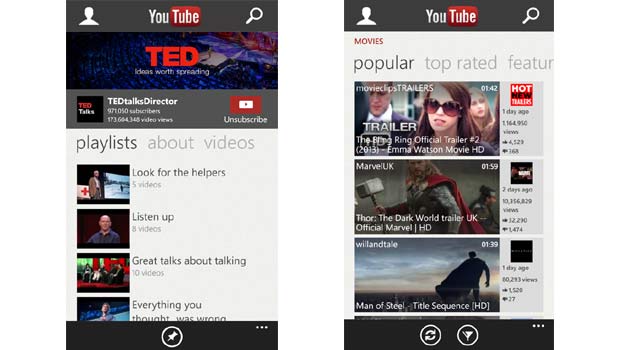 What’s worth mentioning is that the newly released YouTube for Windows Phone software has advertisements enabled, video downloads disabled and other measures to meet the demanded requests. David Howard, Corporate Vice President & Deputy General Counsel at Microsoft, asserts that the main cause of the problem is that the app is not based on HTML5 and they’re willing to work with Google to fix the issue if they stop blocking the app.

The Verge has received statements from both companies. Google’s spokesperson simply highlight that the YouTube app violates the Terms of Service, while a Microsoft representative notes that they’re working to resolve the issue. The main question now is – For how long will WP users be deprived of a proper YouTube experience? No ETA has been given for a new release and we don’t expect it to arrive anytime soon.