YouTube for Android update takes multitasking to the next level

YouTube for Android should receive an update shortly which would greatly improve its offerings. While its APK files are running wild on the Internet, some users are also reporting to have received the update via the official Google Play store. One of the prominent new features that have their way into the app is its ability to render your videos in a small window, as you continue to watch it while also browsing the application for other stuff. Its slide-out navigation has also been overhauled with new additions.

This update takes the app to version 5.0.21, and as pointed out by Android Police, it’s one of the biggest redesigns the software has ever seen. With it, YouTube for Android becomes the recipient of a fresh card-based UI, giving it a much better look than its predecessors. Like we said, the video-rendering small window is something that truly deserves plaudits. How it works is simple; when you’re watching a particular video within the app, you tap on its and pull it down to extract it into a small window. This keeps that video running, while letting you browse through the rest of the app without any trouble. 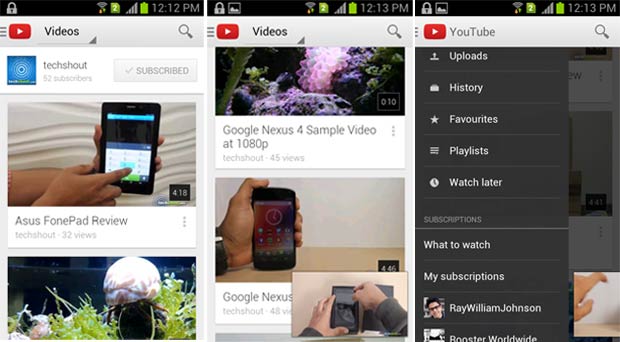 Moreover, you can now quickly access your history, playlists, uploads, favorites as well as watch later sections through a tap on the slide-out menu. A new app icon aside, YouTube for Android even grabs hold of a fully-functional landscape tablet UI for tablets.

These and a number of other fresh changes make this update a huge one for Android users around the world. The new YouTube is expected to begin rolling out officially soon, but for those who can’t wait, Android Police has its mirrors loaded with the APK.