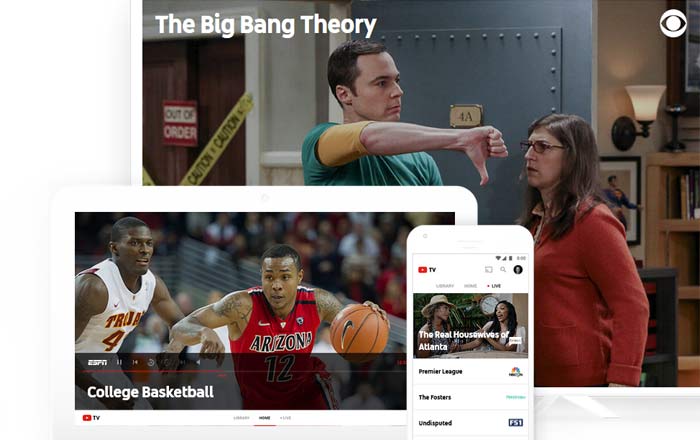 YouTube’s stepping beyond the world of online videos to take on traditional cable television via its own live streaming service. Simply dubbed YouTube TV, the platform will take flight soon in the US.

YouTube TV is priced at $35 per month and can be cancelled at any time. You can form up to 6 accounts within a single membership. Each individual gets unique recommendations and a personal DVR with no storage limits. However, only 3 streams can be watched at the same time.

For $35, you’ll be getting access to live TV sourced from broadcast networks such as ABC, CBS, NBC, and FOX so you can watch shows like Scandal, The Voice, and The Big Bang Theory on YouTube. On the cable side of things, you can stream channels like FX, USA, MSNBC, Fox News, the Disney Channel, E!, and Bravo.

Showtime and Fox Soccer Plus can be added as part of your package for an additional charge. YouTube says it’s roped in more than 40 networks so far, including local TV stations for regional news and sports channels such as ESPN, Fox Sports Networks, and Comcast SportsNet.

YouTube is looking to appeal to people by offering a cloud-based DVR service without setting any limits to how much TV can be recorded. The advantage here is that this lets you save as many shows as you want without the content hogging data or space on your device.

Furthermore, each recording is kept in place for 9 months. YouTube’s also trying to play up the ease of access of its new platform since it can be viewed on smartphones, computers, and tablets. It can be streamed via Google Chromecast and is compatible with both Android and iOS.

Signing up for YouTube TV grants you access to the company’s Red Original series and movies as well. You can find out when it’s hitting your city here.