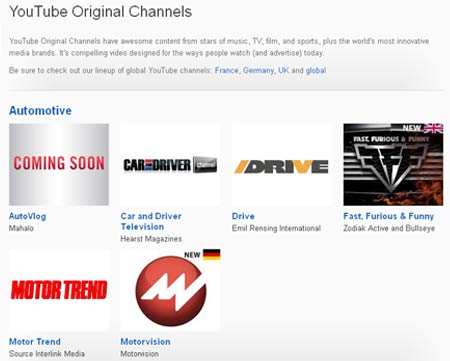 After introducing about 100 channels close to a year ago, YouTube is back with a new generation. The company has decided to go global in its approach and has accepted channels designed by producers, celebrities and media companies based in European countries like France, Germany and the UK, besides the US.

The reason behind introducing even more channels is that the content on the video sharing website is being appreciated by visitors and the company has some figures to prove the same. According to the official YouTube blog, its 25 original channels get more than a million views on a weekly basis.

The website has over 800 million viewers who collectively spend close to 4 billion hours every month on YouTube, a considerable progress from 3 billion hours that was recorded earlier this year. Additionally, the number of visitors on the website has also doubled, says the blog. And this could be the reason why the site’s partners are getting 100k subscribers five times faster than about a couple of years ago.

With a view to offer its visitors with additional online content, the Google-owned service has decided to broaden its horizon to more regions. The content to be broadcasted on these channels will belong to a number of diverse genres including health, parenting, sports, wellness local cuisine, comedy, music, news, animation and more. Lionsgate, Mahalo, Machinima, Redframe, The Nerdist Channel, Katalyst and BBC Worldwide are just some of the names that feature on the list of channels that will bring new and interesting content to YouTube.

This new generation of channels for YouTube will be rolled out in the coming months.