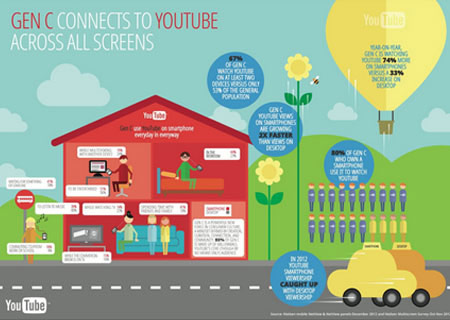 While boasting about 1 billion unique monthly viewers, YouTube noted that almost 1 in 2 people who use the internet visit the site. Thought Super Bowl grabbed a crazy number of eyeballs? The company says that the video sharing website has an audience which is approximately ten times as large. In fact, if the site were a country, it would stand third to China and India.

Advertisers have obviously been paying attention to the portal’s growing popularity and all of the top 100 brands named by Ad Age in June 25, 2012, are currently running promos on YouTube. The driving force behind this exponential growth of visitors to the site is clearly what Nielsen has labeled Gen C. What is Gen C? The official Google AdWords Agency blog describes it to be the whole generation of young adults who ‘watch content on their own terms.’

But where would we all be without those phones and tablets that allow users to stay connected to the web and entertained even while on the move? The Nielsen Mobile Insights Survey covering the last quarter of 2012 claims that 76% of US consumers in the 18 – 34 year age bracket have smartphones. Since last year, there’s apparently been a whopping 74% increase in the amount of time Gen C watches videos on mobile via the Google-owned website.

Around 67% of youngsters view videos from the site on two or more devices. So how did we get all those extra hours for watching clips? 41% of respondents said that they spend time over videos while waiting from something or someone, 15% access clips when ads are playing on TV and 18% keep themselves entertained while traveling from work or school. We are looking at an entire breed of folks who are 45% more likely to be light TV viewers (those who spend less than 2 hours in front of the box daily) and the need for brands to take web advertising more seriously cannot get any more urgent. 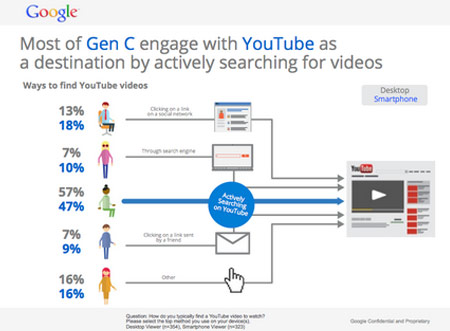 Of the 1 billion unique monthly visitors to YouTube, a significant percentage is driven to the website owing to social networking. 9% of viewers who took part in the survey backing this AdWords report, maintain that they watched a video because it was shared by pals over mail and 18% claim to have done the same after seeing the content on a social network.