The YotaPhone 2 has been official for over a year now, but it’s yet to get widely rolled out. The handset has been up for grabs across Europe since December of last year and it’s headed to the US soon. And instead of directly going on sale through the usual means, the company has chosen to make the handset available via crowdsourcing website Indegogo.

Well, the YotaPhone 2 is no project unlike most of the stuff you’ll find listed on the fundraising website. And it’s quite surprising that the company has chosen Indegogo as a means to offer the handset. We’re not really sure how this will work, but we can confirm that early backers will be given special pricing as part of the early bird deal. 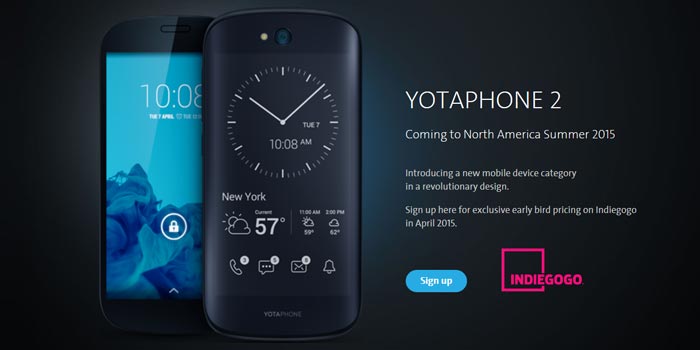 If things work turn out well and YotaPhone sees the US as a good market for its handset, there’s a good chance that it might get a local launch sometime in the near future. There’s no word on how much the device will sell for stateside. However, judging by its current retail tag of €698.99 in Europe, you can expect to sell for around $770.

Also read: New Motorola Moto E LTE model also up for grabs in the US

This makes the YotaPhone 2 as expensive as a flagship smartphone. What’s so unique about the device is that it offers a secondary e-paper display on the rear which allows you to interact with the phone’s UI without the need of powering up the main screen. This panel has an always-on state and doesn’t consume much power. You’ll basically be able to read eBooks for up to 100 hours or use maps for as much as 18 hours on a single charge.

Head over to this link to sign up for the exclusive early bird bonuses. The Indegogo campaign will commence next month and the company will probably start shipping the YotaPhone 2 to the US in the next few months.