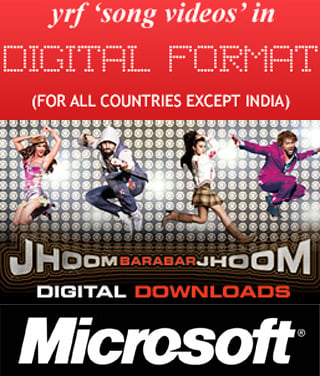 Day 1 of Microsoft’s TechMela 2007 saw a number of sneak peeks, including the too-good-to-be-true oFone. Also unveiled at the event was Yash Raj Films’ video DRM platform through which “song videos” of select YRF movie titles will be available for download in a digital format from the YRF Web site.

Yash Raj Films also announced that song videos from its newly released “Jhoom Barabar Jhoom” movie will also be available for digital download through this platform.

Steve Guggenheimer, Microsoft’s General Manager of Application Development and Platform Marketing made this announcement which is sure to please Bollywood and particularly YRF fans.

Users will be able to buy and download song videos in a digital format from the YRF Web site. Also on offer will be an exclusive song video from YRF’s forthcoming movie “Chak De India” that features everybody’s favorite film star Shah Rukh Khan.

You must be wondering where Microsoft fits into all of this. Well, this secure delivery of digital content over the Internet has been made possible through Microsoft’s cutting-edge Windows DRM technology.

Steve Guggenheimer said, “The availability of song video downloads from Yash Raj Films DRM platform marks a new era in Bollywood’s use of technology to connect better with its audiences. We are very excited about this association, as it has not only given us an opportunity to work with one of India’s most respected production houses, but also enabled us to improve the movie experience for a billion Indians.”

At TechMela, we were treated to a sneak preview of the Yash Raj Films Web site which has been embedded with Microsoft’s Silverlight cross-browser, cross-platform implementation of .NET.

The result: Yash Raj Films Web site but with a huge difference. It will provide users with a great visualization experience for starters. You will also be able to open a cool looking media player to view movie movies. Besides, profiles of actors of the movie in question will also be offered for the viewer’s pleasure.

However, something that really confused us was that when we visited the YRF Web site, a message said that these DRM-free movie video downloads would be available to the whole world except India! Very strange, since India is the home of Bollywood.