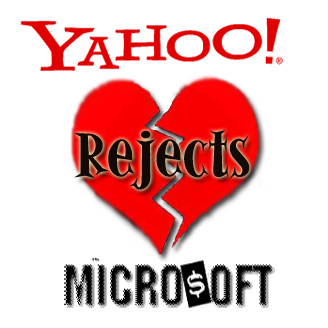 In the first week of February 2008, the world was shocked with Microsoft’s proposal to buy Yahoo for around $44.6 billion. Then came news of a possible alliance between two unlikely companies- Google and Yahoo! Just yesterday, Yahoo officially rejected Microsoft’s offer, after which the Redmond giant responded, detailing all the benefits that Yahoo would have earned itself, had it only sold its soul to the devil.

In a statement, Yahoo was quoted as saying, “Yahoo’s board of directors has carefully reviewed Microsoft’s unsolicited proposal with Yahoo’s management team, and financial and legal advisers, and has unanimously concluded that the proposal is not in the best interests of Yahoo and our stockholders.”

Soon after, Microsoft who probably was surprised at Yahoo’s rejection responded by saying that Yahoo! has not embraced their full and fair proposal to combine the two companies.

“A Microsoft-Yahoo combination would create a more effective company that would provide greater value and service to our customers. Furthermore, the combination will create a more competitive marketplace by establishing a compelling number two competitor for Internet search and online advertising,” said Microsoft in the release.

In a release Microsoft said, “We are offering shareholders superior value and the opportunity to participate in the upside of the combined company. The combination also offers an increasingly exciting set of solutions for consumers, publishers and advertisers while becoming better positioned to compete in the online services market.”

Microsoft playing the strong and tough-skinned company that it is also went on to say, “The Yahoo! response does not change our belief in the strategic and financial merits of our proposal. As we have said previously, Microsoft reserves the right to pursue all necessary steps to ensure that Yahoo!’s shareholder are provided with the opportunity to realize the value inherent in our proposal.”