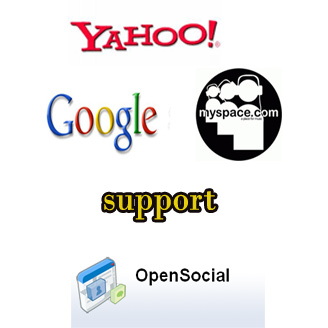 In November 2007, we reported that social network site MySpace and search giant Google had joined hands for the launch of OpenSocial. Now, another Internet powerhouse in the form of Yahoo has also joined the bandwagon and all three have agreed to form the OpenSocial Foundation.

In case you are unaware, OpenSocial is a set of common Application Programming Interfaces meant for building social applications across the Web.

The OpenSocial Foundation will ensure the neutrality and longevity of OpenSocial as an open, community-governed place to build social apps across the Internet.

It will be an independent non-profit entity and will provide transparency and operational guidelines around technology, documentation, intellectual property and other issues related to the evolution of the OpenSocial platform.

According to Wade Chambers, Vice President – Platforms, Yahoo, “Yahoo! believes in supporting community-driven industry specifications and expects that OpenSocial will fuel innovation and make the Webb more relevant and more enjoyable to millions of users.”

“Our support builds on similar efforts with the OpenID community and will expand the opportunity for developers and publishers to benefit from an open and increasingly social web,” he added.

Steve Pearman, SVP of Product Straetgy, MySpace commented saying, “Yahoo is an important addition to the OpenSocial movement, and through this foundation we will work together to provide developers with the tools to make the Internet move faster and to foster more innovation and creativity.”

The OpenSocial Foundation has a web site available here http://sites.google.com/a/opensocial.org/opensocial/Homehere. The web site lists the latest specifications, links to other resources and the opportunity to get involved. Developers will find it especially useful.