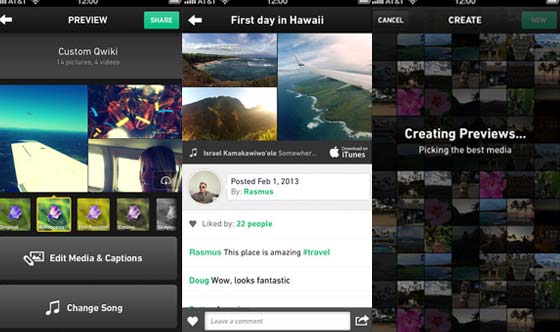 Yahoo has bought Qwiki, the mobile app developer best known for its iPhone video application in iTunes. Word is that the deal was closed at approximately $50 million. But neither Yahoo, nor the startup is commenting on this figure, with both officially announcing the acquisition via blog posts.

Before Qwiki and its iPhone app, the firm was working on an iPad media presentation tool. The application was created to pool together information on numerous topics from various sources on the web. When a user searched for a particular topic from the interface, they would be delivered a comprehensive presentation on the subject. But it didn’t gain as much popularity as the reason for Yahoo buying the firm, or that’s what we’re assuming at least.

The latest news involves Qwiki for iPhone that Yahoo is so interested in, the multinational internet corporation has decided to buy it for the $50 million or so reported by AllThingsD. We’ve been seeing the company on a shopping spree with Tumblr, GoPollGo, Summly, Jybe and more having attracted its attention over the past few months. This apparently has to do with President and CEO, Marissa Mayer’s intention to steer the brand in the direction of mobile.

Well, Facebook has Instangram with video and Twitter has Vine. It was probably time Yahoo got a similar sharing tool of its own. Qwiki is basically an app which combines pictures and videos into interesting movies at a tap. If the final result isn’t what the user wanted it to look like, the in-built editing options can always come to the rescue. These clips can then be mailed, uploaded to Facebook and Twitter or even embedded on web pages.

Yahoo’s purchase of Qwiki does not mean that the app will drop out of iTunes. The former has promised continued support for the tool and a lot more. We’re watching.