Yaari.com, a Social Networking Site launched for Indians by an Indian 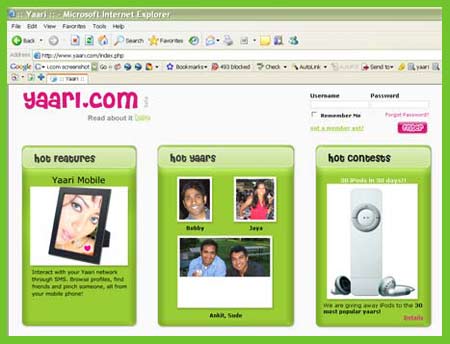 A former student from the renowned Stanford University, Prerna Gupta, has launched a new social networking site Yaari.com that claims to be created by Indian youth, for Indian youth.

Yaari has introduced some unique applications such as Mobile, which enables social networking from anywhere using simple SMS technology.

The Indian social networking site includes all popular features like customizable profiles and media uploading from other sites.

At present, the executive team of Yaari.com comprises of two members, Prerna Gupta, CEO who prefers to be termed as Chief Yaar, and Parag Chordia, CTO.

Gupta said, “What makes Yaari unique is what we stand for – Indian youth. Social networking is about more than just technology. It’s ultimately about the people who are creating it and what image they convey. Yaari is about cool youth in India, having fun.”

Gupta added that her basic aim behind the creation of Yaari is to make it a platform where Indian youth express themselves freely. “We want our users to have input in what Yaari becomes, so we listen closely to what they want, and we give them exactly that.”

Keeping up with this goal, social networking site Yaari also features an active blog, which will soon start featuring prominent Indian bloggers. The site will also hold an online pageant where the contestants get a chance to win modeling contracts and be featured in top Indian entertainment publications.

Gupta and Chordia believe, “The social networking site offers a more exciting and rich user experience than the leading competitor, Orkut, which is cited to have over 1 million Indian users. They also feel that a site created specifically for Indians will have greater long-term appeal. Gupta is confident in Yaari’s ability to win users from Orkut.

Comparing Yaari.com with Orkut, Prerna and co-founder Parag Chordia, opine, “Orkut is good for one thing: scrapping. But eventually users get bored with that, and that’s when Yaari shines.” According to the founders, Yaari is self-funded, and they hope to attract one million users in the first year.

According to Gupta, Yaari gives access on an invite-only basis receives hundreds of invitation requests daily, but to preserve the integrity of the network the access is restricted to the “right kind” of Indian youth.

The Yaari headquarters which, according to Gupta and Chordia are on their laptops and the Internet, is expected to open in an office in South Delhi this year. The founders would then build the team.