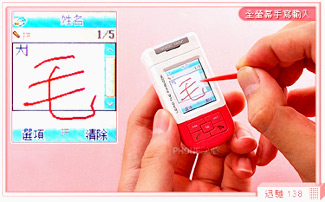 The world is surely a small place to be in. Several times your girlfriend’s best buddy (sadly) ends up being your ex. And let’s not get into the repercussions and after effects of that situation. Anyways as the world’s is growing smaller, the gizmos connecting and linking people across the oceans and via the boundaries, are getting more and more miniscule. And when we speak about connecting people, we can’t forget to mention the mobile phone (hey we are not doing a Nokia ad here), which has surely got the world a lot closer. Small, smaller and smallest! That’s all that we can say.

Here’s a video review of the Xun Chi 138 mobile phone.

Though the phone has been launched a few months back (our apologies for not having reported on it, you see it was too small to locate), what was really weird was that it was really difficult finding a store where the phone was available. However, luckily someone somewhere has found an online store (quite an unknown one though) that is apparently carrying stocks and shipping Xun Chi 138 worldwide. However, if you think that you’re going to get the phone easily, then you’re wrong because the phone will only sell GSM networks in Europe, Australia and parts of Asia, but unfortunately will not work on North American GSM networks such as Cingular/Cellular One, T-Mobile, Rogers, Fido/Microcell, SunCom, Dobson, Edge Wireless, Alltel, Petrocom, Union, Pegaso/Movistar, Radiomovil/Telcel etc., since the frequencies used in North America are different than in Europe and Asia. You can go here for a list of supported countries.