Sony’s apparently been kind enough to let the Xperia Z1s stray out of cover, if only for a blink-and-miss appearance on the company’s official website. A screenshot of the device indulging in a quick break in the open stands testimony to this fact.

You know which smartphone we’re talking about, the one that goes by many names – the Xperia Z1 f, Honami mini and Xperia Z1 mini. Or that’s what can be gathered from the speculations so far. Unfortunately, Xperia Blog which managed to grab a shot of the handset on Sony’s product page, found no clickable link to a list of specifications. 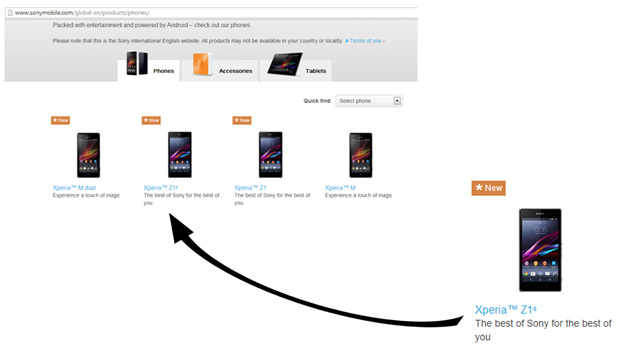 But the ‘s’ in Z1s could probably stand for ‘small.’ The last time we heard about the smartphone, it was reported that this name change could be intended for its debut in China and the release date may be set for today. But we’re not too sure about this detail now.

Assuming the Xperia Z1s is just an international variant of the Z1 f for Japan, some features are available to mull over.

The price of the phone is likely to be lower than that of its full-sized cousin. We’re hoping Sony will give us more than the pink, yellow, black and white color options (seen in the Z1 j) to choose from though. Let’s see.