We recently reported that the Xperia Z1 Compact from Sony is available for pre-order in the UK through multiple retailers and carriers. The Japanese conglomerate has now started accepting bookings as well, and to make the device a more alluring pick, the company is bundling the smartphone with a free SmartWatch 2.

This promotion was spotted at CNET. To avail the offer, you’ll have to shell out £449 for an unlocked and SIM free model. The company is also offering it in color options of black, white, green and pink. The SmartWatch 2 accessory is priced at £149.99 if you buy it separately, making this a worthwhile deal if you’re looking to pick up the Xperia Z1 Compact as well. 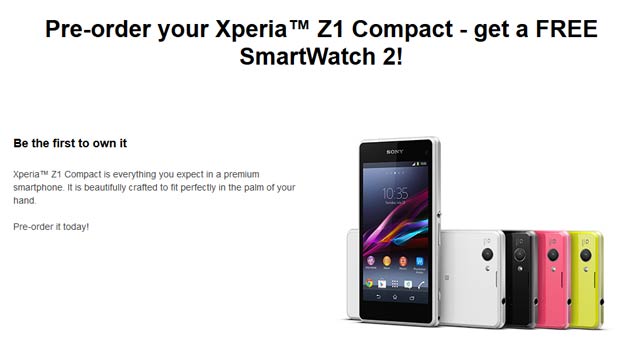 This isn’t the first time the company is offering such a deal. The wearable gadget was also being packed as a freebie with the Xperia Z Ultra phablet. The Z1 Compact made its debut at the CES 2014 last week along with the Z1s that’s an exclusive launch for T-Mobile in the US.

The main highlight of the smartphone is that it offers the same features as the current flagship, but in a smaller form factor. The company has equipped it with its latest technologies including the Triluminos panel and the 20.7MP G Lens camera on the rear.

In other news, Sony is expected to launch a fresh set of devices next month at the MWC 2014. The company will introduce a new flagship smartphone and tablet.