Xolo has launched a new member in its Opus series, the Opus 3, which unlike its predecessors, is being touted as a selfie-focused smartphone. The handset is also said to deliver an exceptional multimedia experience for Rs 8499.

At the said amount, the Xolo Opus 3 is basically tagged the same as the Opus HD which was launched back in October. In fact, both smartphones have a lot in common since they run on Android 4.4 KitKat and offer dual SIM support with HSPA+ 21Mbps. The main difference is that the latter has a 1.2GHz Broadcom chip, while the former takes the MediaTek route with a 1.3GHz quad core processor. 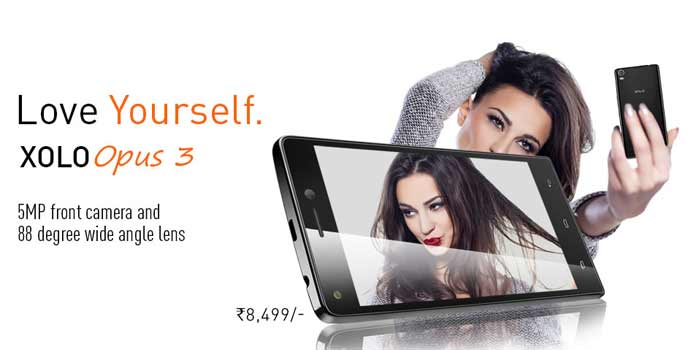 The new release also has a 5MP front-facing camera for taking selfies and making video calls, but there’s no flash for better results in low-light conditions. Xolo notes that this snapper has an 88 degree wide angle lens. And on the rear, there’s an 8MP camera which supports 1080p FHD video recording.

The Xolo handset comes with an HD IPS display of 5 inches and it’s powered by a 2500mAh battery. The power pack is capable of delivering up to 9 hours of 3G talk time or around 5 hours of video playback. For memory, there’s 1GB RAM, 8GB internal storage and a microSD card slot.

Xolo Opus 3 specs at a glance:

The Xolo Opus 3 is already available through authorized retail stores across India.