Xolo takes a bite into tablet segment with 8-inch Tab

After achieving much success in the smartphone market, Xolo has launched its 8-inch Tab, marking its foray into the tablet segment. The device runs on the Android 4.1 Jelly Bean platform and it features voice calling over cellular, making it a direct competitor to the Lenovo A1000, the Galaxy Tab 3 and the Asus FonePad amongst others.

Coming from the company that has been amongst the first to release phones based on Intel and Nvidia chipsets in India, we were expected something better in design that doesn’t remind us of a Samsung slate. What the Xolo Tab delivers is an 11.3mm thick form factor and a 480-gram weight. The 8-inch IPS display fitted on the front features 160ppi pixel density and 768p resolution. Here, you’ll also find a 0.3MP camera and an earpiece for voice calling. The device supports HSPA and 2G networks as well as Wi-Fi 802.11 b/g/n and Bluetooth 4.0. 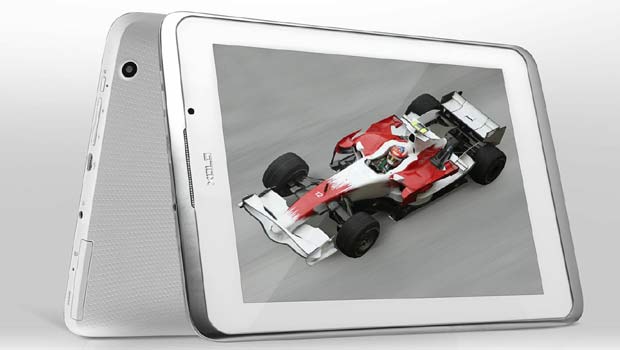 There’s even a 2MP rear-facing camera for capturing images and videos. While the processor employed here has quad cores, it being the Qualcomm Snapdragon 8225Q which is based on the Cortex A5, is quite disappointing, The CPU is clocked at 1.2GHz and accompanied by Adreno 203 graphics. For memory, the company has provided 4GB of internal storage, 1GB of RAM and a microSD card slot. Last on the list is a 4000mAh battery that can deliver up to 12 hours of 3G talktime, 3.8 hours of video playback or 4 hours of web browsing.

The Xolo Tab will be available for purchase through retail stores by the end of the week. The device is priced at Rs 13,499 and it comes in a single color, white.