The Xolo Q520S has been officially launched in India and it’s being touted as a premium release with an affordable price tag. The phone is available for Rs 5699 which is pretty cheap and it does have quite an attractive design, but at the cost of lower specs.

The Xolo Q520S is an entry-level release and uninspiring as it looks from the front, the rear has been given a brushed metallic finish. Of course, the phone is still made from plastic and it’s pretty bulky at 9.7mm. And just for the premium look, you’ll be sacrificing better hardware as most devices in the same category offer at least a 5-inch display with 1GB RAM. 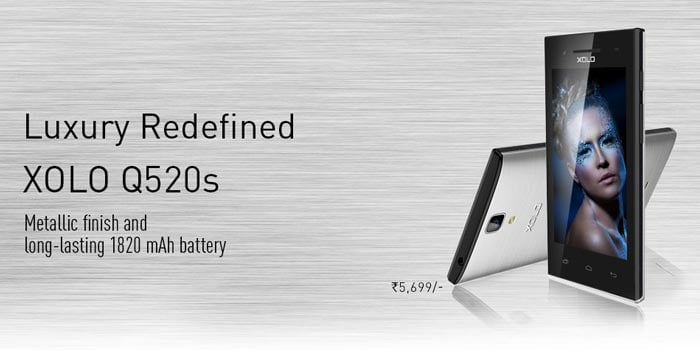 The new Xolo phone, on the other hand, has just 512MB of RAM at its disposal and the screen size is 4 inches with WVGA resolution. The company has employed the usual 1.3GHz quad core MediaTek processor based on the Cortex A7 to do the heavy lifting. Also, you’d expect a premium phone of such to be treated to Lollipop, but it looks like Android 4.4 KitKat is what you’ll have to stick with for now.

Xolo has included dual cameras with the phone, a 5MP shooter on the rear with 1080p video recording and a VGA snapper on the front. Other features of the Q520S include dual SIM card slots, HSPA+ cellular support, 4GB internal storage, a microSD card port and an 1820mAh battery.

The Xolo Q520S is already available for purchase through eBay in silver only.