In news that will definitely come as a surprise to Xolo fans, the company is currently testing a tablet named LT2000 which is unlike other similar slates that Indian manufacturers are releasing right now. It apparently features a 9.2-inch display, taking it straight into the iPad and Nexus 9 territory, while it even runs on a 64-bit processor.

According to a leaked GFXBench database entry brought to our notice by AndroidOS, the Xolo LT2000 runs the Android 4.4.4 KitKat OS and carries onboard a 9.2-inch display which bears a 720p HD resolution. The 64-bit processing is offered by the commonly used Qualcomm Snapdragon 410 chipset which will house a 1.2GHz quad core CPU. 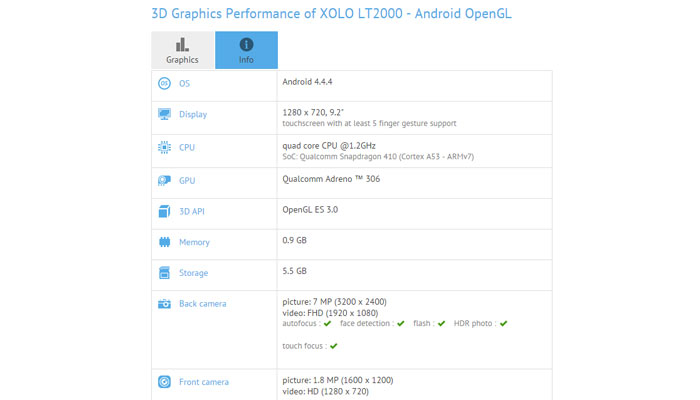 This setup will be accompanied by an Adreno 306 GPU and 1GB worth of RAM. Furthermore, 8GB worth of storage is expected to form part of this tablet as well, aside from a microSD card slot of course. The 3G-capable LT2000 grabs an 8MP rear camera with 1080p video support and a 1.8MP front shooter.

Such a large display is something Indian tablet makers are yet to embrace whole heartedly, which is why the new Xolo device will be a bold step from the company. And since its price is expected to be extremely low as compared to iPad devices, enthusiasts who can’t buy the Apple tablet due to its high asking amount will have a cheap option to look at.

Here’s a short glance at the leaked specs of the Xolo LT2000 tablet:

We’re not sure when the leaked Xolo LT2000 will be released by the company, but we’ll have more on it as soon as additional details are out into the open.