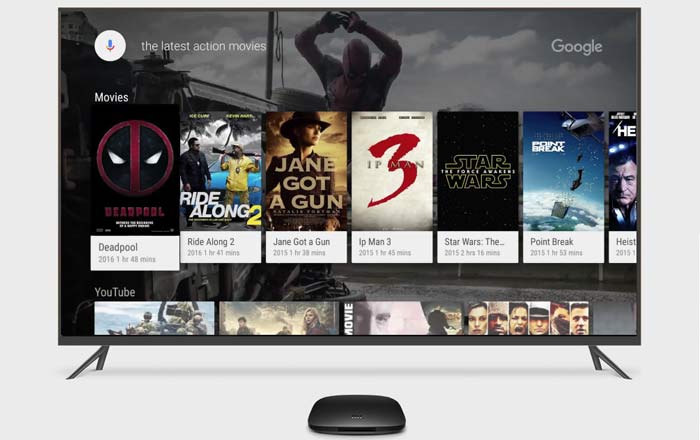 Xiaomi and Google have partnered up together to announce a brand new Mi Box at the latter’s I/O conference. The updated device now supports 4K videos and runs on the latest Android TV 6.0 OS.

The Xiaomi Mi Box will hit the US soon, with its price likely set to be declared closer to its launch. The Google-backed Android TV device works as a standalone set-top box which streams 4K video at 60fps. It’s also compatible with the HDR10 and HDMI2.0a standard, the second promising speeds of up to 18Gbps.

Xiaomi is shipping the offering with a free Bluetooth remote control which comes with an in-built speaker to wirelessly search for things like the weather or new action movies. It’s also selling a separate Mi Game Controller. The accessory offers dual-motor vibration feedback along with a 3-axis G sensor for better control and accurate feedback.

As for specs, the Mi Box packs a rather paltry 8GB of internal room with no option for expansion via a microSD card. It’s powered by a 2GHz quad-core Cortex-A53 processor which gets things done with the help of 2GB of RAM and a Mali 450 GPU. The product supports Dolby Digital Plus and DTS technology for superior multichannel HD audio encoding.

Other than the standard apps, radio stations, games, movies such as Sling TV, YouTube, Netflix, Vudu and FandangoNOW, users can also wirelessly cast their phone’s photos, videos and music directly to their TV. The Xiaomi device supports dual-band 2.4GHz/5GHz Wi-Fi connectivity and further offers a single USB 2.0 port and a 3.5mm audio output.

We’ll let you the know the moment the Xiaomi Mi Box hits availability in the coming days.