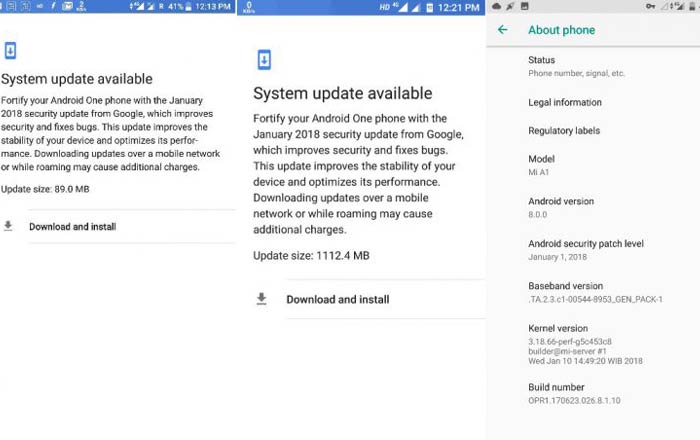 Xiaomi has officially got the Mi A1’s Android 8.0 Oreo rollout back on track after an aborted start. The company began beaming out the new OS a few weeks ago, but pulled the update after it discovered that the software was riddled with bugs.

That hopefully won’t be the case with the new OPR1.170623.026.8.1.10 upgrade which is being released gradually for the Android One phone. Xiaomi’s also included the January Android security patch inside the update, good news for security-conscious users out there.

Anyone who had accessed the first Oreo update will have to download just 89MB of data. The remaining Nougat-running population will find a 1112MB download waiting for them. Xiaomi says it eliminated the problems owners were facing with the initial upgrade, but didn’t specify which ones exactly.

Based on reports, it seems OPR1.170623.026.8.1.10 for the Mi A1 fixes the unresponsive dialer app issue, stops Bluetooth connectivity from draining the battery, enables the fingerprint swipe gesture UI, and allows users to interact with ambient notifications. Moreover, the audio quality while video recording has improved and random reboots have stopped.

Xiaomi has apparently further resolved a GPS icon being stuck problem, a DND volume UI issue, a wrong rapid charging message, a SIM is HD capable icon, and app is running in background notification. However, there are a few people who still appear to be facing some concerns.

You can check if you’ve gotten OPR1.170623.026.8.1.10 by heading to Settings, scrolling down to About Phone, and finally tapping System updates.