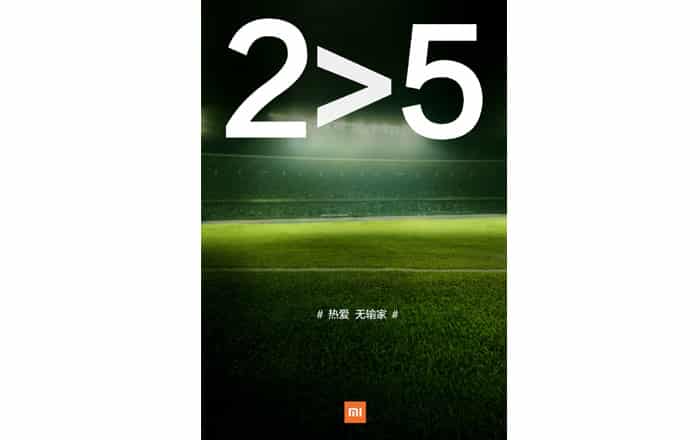 Xiaomi has just released a new teaser poster for an upcoming device on Weibo which may just be the heavily leaked Mi Note 2. The handset has been the subject of countless rumors for months now.

If it really is a teaser for the Xiaomi Mi Note 2, the image will be the first official acknowledgment from the company confirming the existence of the phone. It’s somewhat tricky to determine what exactly the photo is talking about since it just depicts a stadium with the text 2>5. There’s also a caption in Chinese which roughly translates to ‘Love it, no one lose.’

The fact that the headline contains the number 2 is a strong point in favor of the teaser being about the Mi Note 2. The 5 may represent the Mi 5. Both are being judged against the other, which might indicate that the upcoming smartphone could boast superior specs as compared to the company’s current flagship.

This theory is supported by the recent spate of rumors concerning the Xiaomi phone. According to these speculations, it’s set to get top-of-the-line specifications like a dual-camera setup consisting of two 12MP cameras and pressure-sensitive screen which will give way for 3D Touch-like functionality.

Furthermore, the Mi Note 2 could also be blessed with a large 4000mAh battery which supports Quick Charge 3.0 fast charging technology. Other possible features include a dual-curved 5.7-inch AMOLED display, a hidden or ultrasonic fingerprint sensor, a high-end Snapdragon 820 or 823 processor, Hi-Fi audio, and NFC connectivity.