Xiaomi Redmi Note 5 Pro gets Face Unlock ahead of schedule

Xiaomi’s got a surprise for the 3 lakh people who bought the Redmi Note 5 and Redmi Note 5 Pro in the phones’ first sale. The latter will be getting access to Face Unlock via a software update as soon as it’s taken out of the box.

To recap, Xiaomi had promised to roll out its Face Unlock software to the Redmi Note 5 Pro by the end of March. The company’s now done away with this delay by making the tool available immediately through an OTA update to MIUI version 9.2.4 NEIMIEK for all owners.

As revealed by Xiaomi Product PR Lead Clinton Jeff in a tweet, MIUI 9.2.4 also includes major camera improvements and stability optimizations. Face Unlock is the star of the show here, as it’s the first time the brand has employed facial recognition technology in its phones. 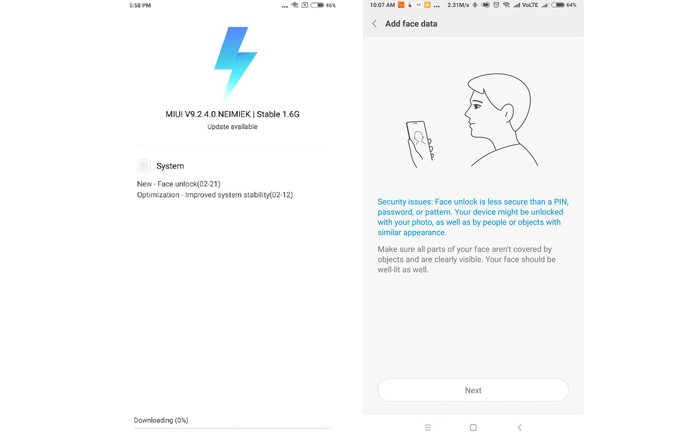 Xiaomi claims Face Unlock can perform its magic in under 0.2 seconds. It’s not as advanced as Apple’s Face ID though, since it relies on the device’s 20MP selfie camera to get things done instead of a dedicated hardware solution.

Even the setup page for Face Unlock warns users that the feature is less secure than a PIN, password, or pattern. The Redmi Note 5 Pro might get unlocked through a photo, similar looking people, or even objects. It further requires owners to have a well-lit face which is clearly visible.