The Xiaomi Redmi Note is the third smartphone from the Chinese OEM to reach India and we’re reviewing it to see whether it meets the same standards as the previous two releases, namely the high-end Mi 3 and uber affordable Redmi 1S. The handset in question falls in between the two said devices where hardware and price are concerned and it’s being offered in two different versions, one with an octa core processor and 3G HSPA+ connectivity and the other carrying a Snapdragon 400 chip with 4G LTE. We’re putting the former through its paces, so join us as we find out whether this device is a bang for your every buck or a waste of your hard earned Rs 8999. 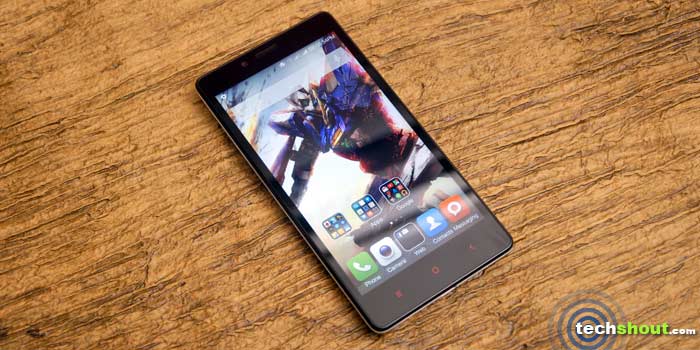 The Xiaomi Redmi Note is essentially a larger version of the Redmi 1S with better specs, of course. The phone’s design is pretty similar to the latter’s and not much has changed visually except for a couple of components being relocated. The loudspeaker is now on the bottom rear panel and the notification LED is to the left of the camera on the front. The overall construction is from polycarbonate just like the smaller model. But instead of a matte finish on the rear, the OEM has gone for a smooth glossy coating which looks nice, yet has its downsides.

After extensive use, the shiny coating isn’t a pretty sight as it attracts smudges easily and is also prone to scratches if you’re not careful. Xiaomi’s Note has a rather bulky waistline of 9.45mm and it’s pretty huge as well, thanks to the 5.5-inch display it carries. On the upside, the phone isn’t all that heavy and at 199 grams and it can be easily held in a single hand. Like Samsung and a few other OEMs, the Chinese company prefers using capacitive hardware buttons instead of virtual on-screen ones and these keys have backlight illumination which wasn’t preset on the Redmi 1S. 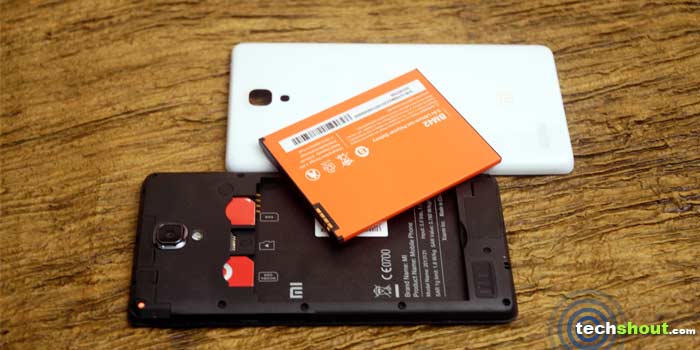 Where components are concerned, the microUSB port can be found on the bottom, the volume keys and power button are on the right side and the 3.5mm audio jack is located on the top. If you pop open the rear panel, you’ll be greeted by a large battery of 3100mAh capacity, above which you’ll find two SIM card slots and a microSD card bay in the middle which isn’t hot swappable.

We’re getting straight to the point – The 5.5-inch IPS LCD panel used here is the best feature of the phone. The screen offers some great warm colors that pop. And even though the panel proffers 1280 x 720 pixel visuals with a mere 267ppi pixel density, everything looks crisp and even better compared to some 1080p screens. The viewing angles aren’t perfect, but we’ve got no reason to complain. Visibility under the bright sun is pretty decent as well, provided you crank the brightness to full. And on minimum, the screen gets dim enough for strain-free viewing in dimly-lit conditions. All-in-all, the display is great for watching movies, reading and even playing games. 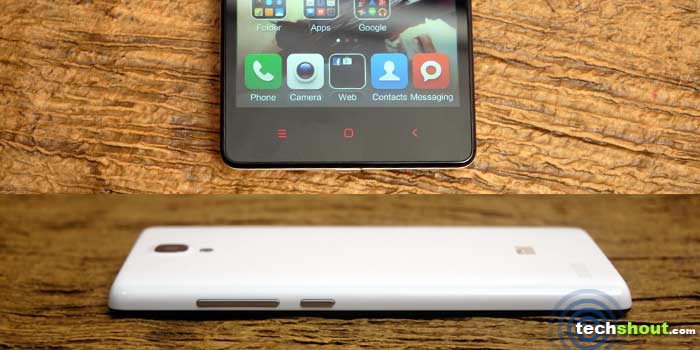 The Xiaomi Redmi Note’s 13MP rear camera is another great feature. The snapper performs exceptional well in bright surroundings as images appear crisp and lively. But the same cannot be said for in-door use or in dimly-lit conditions as the sensor starts to show signs of struggle. The flash is also inadequate at times as it doesn’t offer enough illumination, resulting in dark and grainy pictures. Where video recording is concerned, footage captured at 1080p was pretty decent. Colors look good and we didn’t notice any stuttering. The main issue here is that the camera takes time to focus and you’ll have to constantly tap the screen to speed things up. 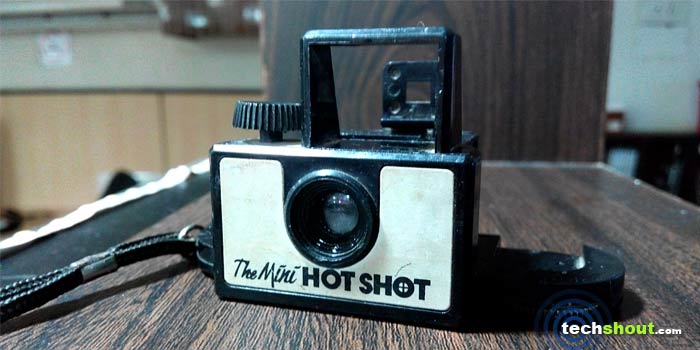 On the upside, audio quality in recorded videos turned out great. You get stereo-like results with even the furthest of sounds clearly audible. Xiaomi has also added features such as zero shutter lag, face recognition, HDR and real-time filters. The 5MP front snapper on the other hand, is a pretty average performer. It doesn’t have auto-focus and the annoying part is that there’s a 1-2 second delay before the image is captured. Also, the default camera app doesn’t allow you to add filters in real time which means you’ll have to do some post capture editing to tweak your selfies. 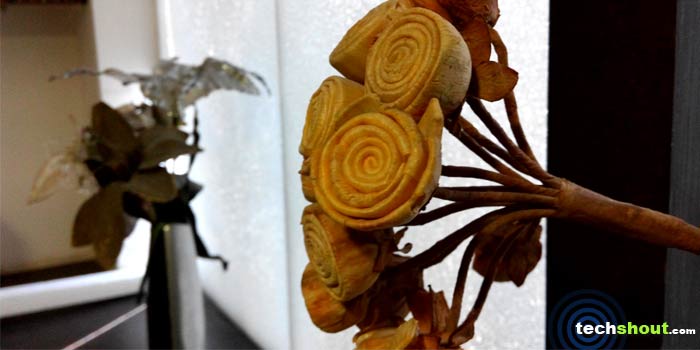 The Xiaomi Redmi Note has hardware suited for a mid-range flagship, but sadly, it doesn’t perform as one. Even with the 1.7GHz octa core chip and 2GB of RAM (1.2GB is usually free) onboard, the UI is very laggy, especially when opening folders and launching apps. Obviously, the hardware isn’t to be blamed and you have to remember that the phone runs Android 4.2 Jelly Bean which is pretty much outdated. 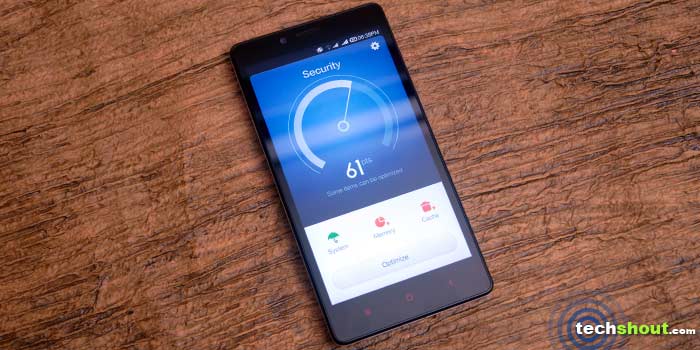 Nevertheless, you still get the same MIUI V5 interface that’s found in the Redmi 1S and Mi 3 smartphones, both running newer versions of Google’s mobile OS. And Xiaomi has promised an update to 4.4 KitKat in the very near future, albeit we’d rather see it arrive out of the box to spare customers the hassles of a half-baked firmware.

We’ve already covered the MIUI V5 interface in our Redmi 1S review, so we won’t be going into details here. The Redmi Note really knows how to keep its cool. While the smaller model heats up pretty quickly, we barely felt the phone’s temperature spike even after extensive use. The phablet scores well on benchmarks and is positioned amongst the high-end devices. 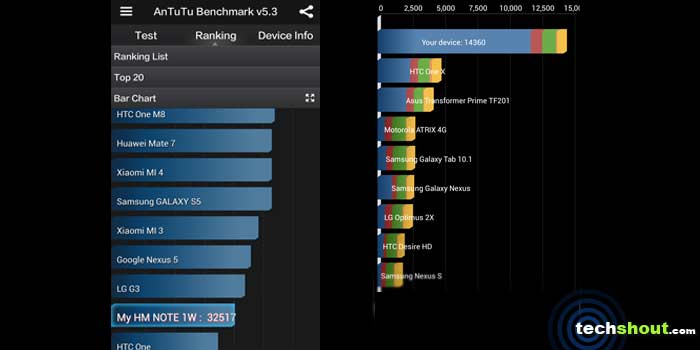 And while that’s fairly true for the CPU which is a beast, the graphics performance isn’t as great as we expected it to be. Nevertheless, this phone will run almost any game or application you throw at it. AnTuTu benchmark gave it a score of 32517, while Quadrant Standard Edition pegged it at 15625. The phablet is almost as powerful as a 2013 flagship smartphone like the Galaxy S4 and the Nexus 4. 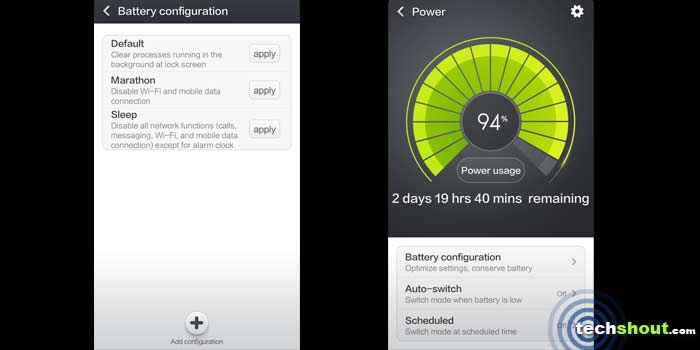 Owing to the sheer size of the Redmi Note, the company has added a pretty huge battery which is rated at 3100mAh. This power pack has enough juice to keep you going for an entire day on heavy usage. And if you use the phone moderately, you might just be able to squeeze around a day extra out of the cell. Based on our tests, we can confirm that the phone is capable of delivering over 6 hours of Wi-Fi web browsing or just above 5.5 hours of streaming HD video online. And since the battery is removable, you’ll be able to carry a spare for non-stop use when on the move.

Like its smaller sibling, the Redmi Note has a display to love.

The octa core chip can handle even some of the most demanding games Android has to offer.

If you’re not into heavy gaming or other tasks which put the processor to its max, you’ll notice some great battery life.

The phone runs on an outdated version of Android, namely 4.2 Jelly Bean, and the UI lags quite a bit, especially when opening and closing folders.

The MicroSD card is not hot swappable. You need to remove the battery to replace the chip.

The rear panel is a smudge magnet and the overall body is quite slippery to hold.

The Xiaomi Redmi Note is a great bargain. For Rs 8999, you get more than your money’s worth as the phone offers a beautiful display, a pretty good rear camera, great battery life and a chipset that will let you run almost anything you thrown at it. But good luck getting your hands on the smartphone as it is exclusive to Flipkart and will available every Tuesday only through flash sales which end in mere seconds. We’re giving the phone a 3.5 out 5 rating and it could have scored higher if the UI wasn’t so sluggish.