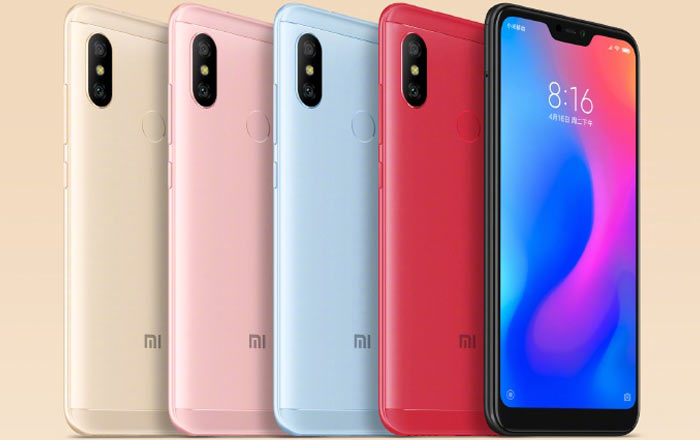 The Redmi 6 Pro’s launch is just a few days away on June 25, but that hasn’t stopped both Xiaomi and Weibo leaksters from revealing images of the smartphone. The former’s released a number of official renders to show off the smartphone from all angles and confirm its various color options.

These include Sand Gold, Lake Blue, Rose Gold, Black, and Flame Red. The front features a notch, a first for a Redmi phone. There’s a significant amount of chin at the bottom, but that’s to be expected given its budget nature. The cutout at the top allows the phone to have a 19:9 aspect ratio, as teased by Xiaomi in the past.

The back sports a vertical dual camera setup with an LED flash unit in between. In fact, the rear surface looks very similar to the Redmi Note 5 Pro, right down to the position of the fingerprint scanner and thin lines at the bottom and top. The older smartphone has an 18:9 aspect ratio and no notch at the front.

The hands-on snapshots of the Redmi 6 Pro pretty much back up everything revealed in the official renders. One image depicting the About page discloses that the handset will run on MIUI 9.6 based on Android 8.1 Oreo. There are also hints of 4GB of RAM and 64GB of storage inside.

All this might be powered by a 2GHz octa-core processor. Xiaomi’s indicated that it’ll be using a Snapdragon 625 SoC, but this might not come true. The Redmi 6 has a more powerful Helio P22 chip, so it wouldn’t make sense to equip the top-specced member of the series with a slower chipset.

Xiaomi has further hinted that the Redmi 6 Pro will gain a 4000mAh battery. Speculation so far suggests that there’ll be a 5.84-inch FHD+ display, 12MP main rear camera, and 5MP selfie snapper.