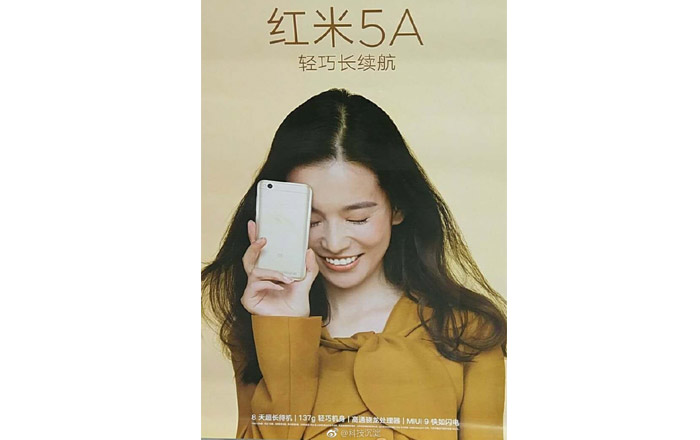 Xiaomi is cooking up a couple of budget phones for release soon, including the Redmi Note 5 and Redmi 5A. The former got its day in the spotlight last week and now the latter has shown up in the form of an official-looking poster.

It seems someone captured a photo of the poster and shared it for all the world to see. It clearly showcases the back of the Redmi 5A. The device appears to have stuck to the Redmi 4A’s design for the most part. The speaker grille is present at the rear which has been divided into 3 parts courtesy antenna lines at bottom and top.

A single camera can be spotted next to an LED flash unit. GizmoChina believes the previous variant’s plastic body has been swapped with a metal one. This would mark a significant upgrade in terms of build. As per the text, Xiaomi is hoping to attract people who are seeking a phone which is lightweight and boasts of a long battery life.

The Redmi 5A will apparently weigh in at 137g and last for 8 days of standby time. Sadly, the actual battery capacity hasn’t been mentioned. Plus, the Redmi 4A tips the scales at 131.5g so the new handset has actually become a bit heavier. The blame for this may lie with the new metal build.

Not much else can be gleaned from the poster, other than the fact that the Xiaomi offering will run on MIUI 9 and a Snapdragon processor. A previous TENAA listing had revealed that the Redmi 5A could feature specs like 2GB/3GB of RAM, 16GB/32GB of ROM, a Snapdragon 425 SoC, a 3000mAh battery, and a 5-inch 720p display.