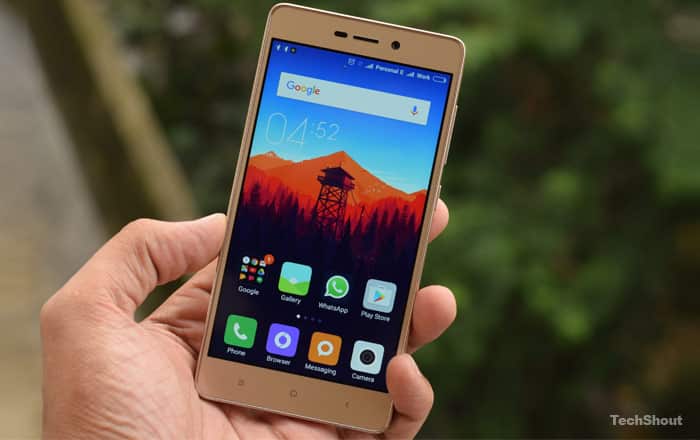 When it comes to budget smartphones Xiaomi has a knack of coming up with the best ones, and its Redmi range has always been at the forefront of this revolution. The company’s formula of pushing powerful specs in affordable devices continues with the Redmi 3S Prime which comes with the Snapdragon 430 chipset, 3GB of RAM, 32GB of storage, a fingerprint scanner and a massive 4100mAh battery. And all this, for just Rs 9000. There’s also a 2GB RAM variant which ships with 16GB of storage and no fingerprint scanner at Rs 7000. On paper, the Redmi 3S phones seem incredibly attractive, but how do they perform in real life? We’re going to review the higher end Prime version today to help you find out whether’s it’s worth your money or not.

Believe it or not, there are people who still prefer 5-inch display phones. They make for compact bodies and easy one-handed use. The Redmi 3S Prime hence is a great choice for such people. The 3S Prime’s exterior shell is made of metal and it beautifully wraps around the edges. This combined with the fact that it is 8.5mm thick, makes for a great grip. And despite having a large 4100mAh battery, the 144 gram weight is surprisingly low. In fact, it’s even lighter than the Asus ZenFone Max (2016) which kicks in a 5000mAh battery. The external appearance will be nothing new to those who have used Xiaomi phones before. You’ve got a hybrid dual SIM tray to the left and power and volume keys to the right which are pretty tactile by the way. Up top is a 3.5mm jack – thank god for that – a microphone and an IR blaster for the lazy ones who don’t want to pick up that remote that’s lying just beside you. Yes… I’m talking about you! And the bottom end it has a microUSB port because USB Type-C is still not ready to make the jump into the affordable smartphones segment. 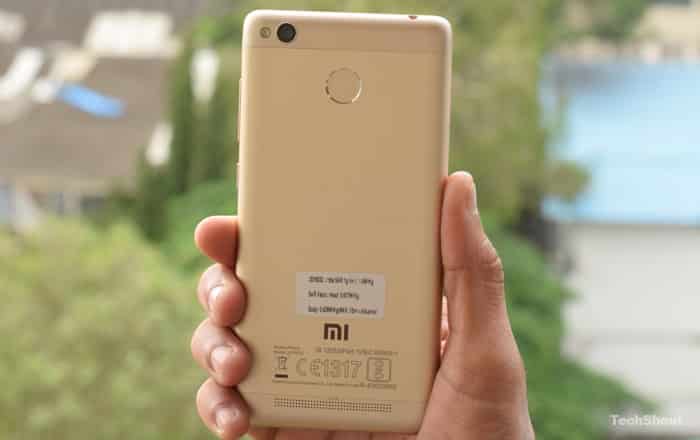 On the back surface is a non-protruding camera and a single LED flash module. The fingerprint scanner sits right below them, and it has a nice silver ring surrounding it just like other Xiaomi handsets. What spoils the looks of this phone completely is the SAR value sticker that has been stuck on the back surface for some reason. It’s hard to remove it without it leaving a stain, and that’s downright annoying. One more little caveat is that the capacitive keys on the front do not light up. But we will say that the overall design of the Redmi 3S Prime is top notch. It’s a pleasure to hold the device with its chunky body and its compact footprint.

It’s a general trend this year to not upgrade displays of new-generation phones, and the Redmi 3S Prime has stuck to that. You’re getting a 720p HD IPS LCD, the 5-inch dimension of which, renders a 294ppi pixel density. This is by and large a pretty neat display. You get great viewing angles, good brightness and admirable outdoor visibility. The color temperature is slightly towards the cooler side, but that’s something which can easily be changed in the Settings menu. 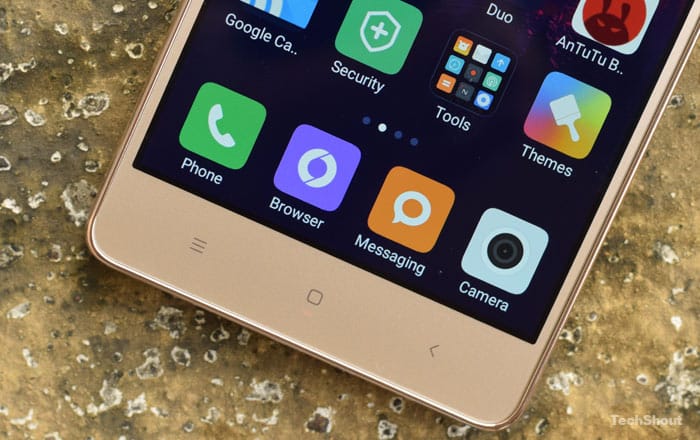 Xiaomi’s Sunlight Display technology could have been a great addition to the device, but the budget constraints have seemingly led to the engineers abandoning this idea. Regarding sound, there’s not much to say. The back firing speaker could have been a bit louder, but it thankfully doesn’t make any compromises in the sound quality department. Audio coming through the headphone jack is crisp.

It’s quite sad that the Redmi 3S Prime doesn’t run MIUI 8 out of the box. But the consolation is that the base software is Android Marshmallow. You’ll of course get an update to MIUI 8 in the near future, but here’s what MIUI 7.5 looks like on this phone. It’s nothing new for previous Xiaomi users. A few highlight-worthy features include a Child Mode for providing only specific apps for kids, an iPhone-like Quick Ball functionality and a One-Handed mode which seems unnecessary on a 5-inch device. Expandable notifications which have been missing from MIUI since the start are finally here but they’re quite tricky to access. You need to swipe down on notifications with two fingers rather than one to get to the additional options. Plus, the 3S Prime supports USB OTG which its close competitor the Honor 5C doesn’t. 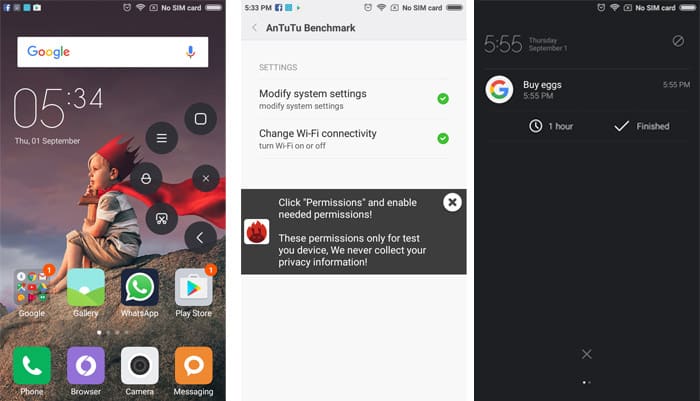 The useful Security app is also there for assisting in device management. Another great feature of the software is that long-pressing the home button on the lockscreen quickly launches the flash light. Such kind of thoughtfulness surprises us, but it’s also perplexing to see a number of anomalies being completely ignored by Xiaomi. The problem of app notifications not showing until you open the app is still prevalent. There is a way to fix this but it’s far too complicated. And we couldn’t run AnTuTu benchmark on this phone because the device kept asking for permissions that were already provided. Despite running Marshmallow, MIUI 7.5 chooses to not include Google Now on Tap, one of the most important features of this software.

Xiaomi has hit the right note here. The 13MP f/2.0 camera on this handset is an excellent photography companion. It’s at times hard to believe, looking at your images, that they’ve been clicked through a phone that costs just Rs 7000 (the lower end model has the same cameras). In terms of detailing, there a slight weakness here, but the pictures are unbelievably sharp and true to life. The dynamic range is great, and so is the color reproduction. Low-light shots are grainy but they never look completely shabby. Here too the camera tries its best to keep the colors natural, not spoiling your pictures with unneeded and unnatural hues that are usually designed to hide the low-light weaknesses of cameras.

The camera app has not changed from past Xiaomi phones. The much loved filters as still there, apart from a Manual Mode which sadly only offers White Balance and ISO options. The 1080p videos shot by this camera aren’t what we’d call excellent, but they’re indeed admirable. You also get slow motion and timelapse options as usual. As for selfies, they are extremely sharp and well colored. The 5MP front camera on this device is a great asset for selfie enthusiasts. To wrap up, the Redmi 3S Prime’s camera setup is indeed a big winner.

To say that the Redmi 3S Prime is a tiny monster won’t be an overstatement. The phone easily handles everything you throw at it, and it never feels like something priced at just Rs 9000. We tried running multiple games at a time, and it handled them effortlessly. There were no notable heating issues as well. As for benchmarks, its single core test on Geekbench 3 garnered a score of 641, whereas its multicore test offered a result of 1655. On Quadrant Benchmark, its score reached 22607. 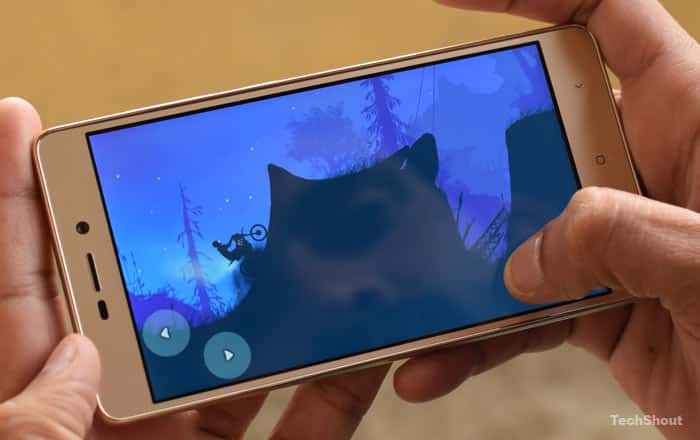 Compared to other handsets, these scores might be low, but we’d advise you to not trust them as they don’t show the true potential of this phone. Speaking about the fingerprint scanner, it’s not the fastest, but it isn’t frustratingly slow either. Xiaomi has equipped this device with a 4100mAh battery. This in itself is promising, but the Redmi 3S turns victorious when it offers 2-day battery life with moderate usage. And with heavy usage too, it will surely last you more than one day. Moreover, this long-lasting power pack supports quick charging as well.

It would be safe to say that the Xiaomi Redmi 3S Prime has set the gold standard in the budget smartphone segment. It combines great design with superb performance, and tops it off with incredible battery life. And yes, it takes awesome pictures too. It’s no doubt the best smartphone you can buy at Rs 9000. If only Xiaomi could look into improving its archaic software experience. We’re giving it 4.5 out of 5 stars.