Xiaomi Redmi 1S Review: A look at its best and worst features

In a market over populated with affordable smartphones, the Xiaomi Redmi 1S which comes from a company that’s unheard of by most consumers in India has managed to steal the limelight from the local competition. We review it to uncover whether it’s some sort of sorcery or just one amazing piece of hardware. For an asking price of Rs 5999, the phone packs features that you’d find in mid-range handsets which mostly sell for around Rs 10000 and above, with some even retailing for around Rs 20000.

But is that enough to attract buyers in sheer numbers? Apparently ‘yes,’ since Xiaomi has a pretty well thought-out marketing strategy where it makes the phone available in limited quantities via flash sales via online retailer Flipkart. In a matter of seconds (poof!), it’s out of stock, good luck next time. While this has created a lot of hype, we’re here to tell you whether the handset is really worth your hard earned cash, even if it doesn’t cost much. An in-depth review awaits you past the break, covering everything from the phone’s design to how well it performs. 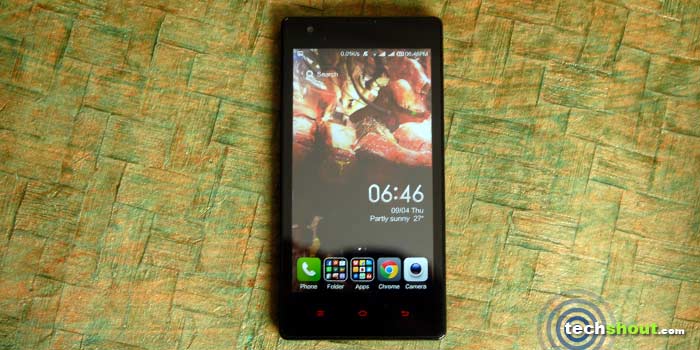 We’re going to cut to the chase here – For a Rs 6K phone, the Redmi 1S is a pretty decent looking release. It’s got nothing out of the ordinary to offer as the overall body is constructed from polycarbonate, while the entire front panel which comprises of the display, a camera, 3 capacitive touch buttons and a notification LED, is coated with Dragontrail scratch-resistant glass. If you were expecting a cheap design since, you know the device is inexpensive and comes from China, we’re not sorry to say you’re mistaken.

The Xiaomi Redmi 1S phone is as sturdy as a well-made Samsung Galaxy handset like the S3 and it feels costlier than what you’d have to pay to land a unit. Sure, the display is a smear magnet and the rear panel does attract quite a bit of smudges, but the overall design is clean and minimalistic. Having a thickness of 9.9mm, there’s quite a lot of bulk here and the device isn’t lightweight either, weighting 158 grams. 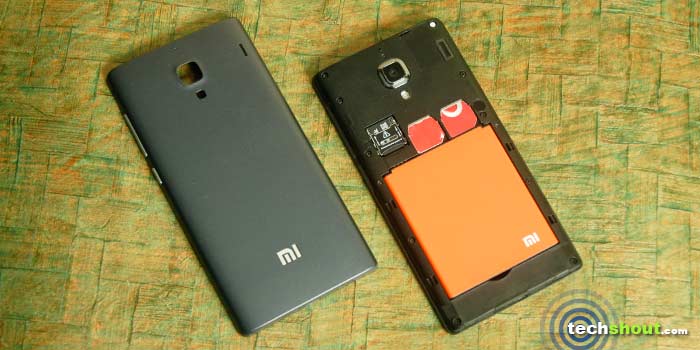 Size-wise, this 4.7-inch device can easily cover Sony’s 5-inch Xperia Z from head to toe – Blame that on the capacitive touch keys. Nevertheless, it’s quite comfortable to hold and you have the curved sides to thank for that. On the top of the handset, you’ll find a 3.5mm audio jack, while the microUSB port is on the bottom. The volume controls and power key are at the typical location, the right corner.

On the rear, the camera is centered at the top with an LED flash just below, and there’s the MI logo embedded on the bottom which is made from stainless steel. As you probably know, this panel can be popped open to gain access to the battery that’s removable, the dual SIM card slots and the microSD card bay. 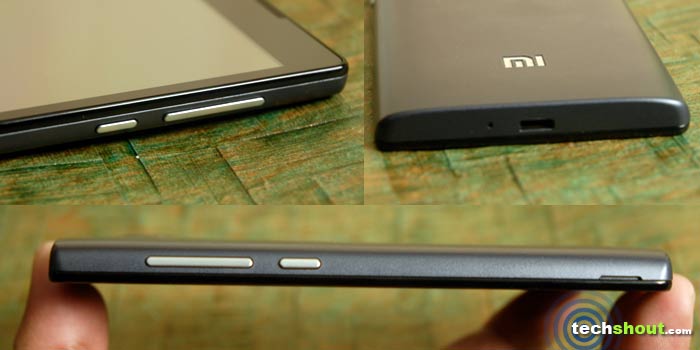 If we were to compare the handset’s design with the Moto E’s, Motorola’s most affordable phone is definitely the more premium of the two, especially the black version which dons a soft-touch finish on the rear panel. The latter handset is also much more compact as it carries a slightly smaller display of 4.3 inches with slim bezels. While good looks are certainly very important, the Xiaomi device doesn’t quite turn heads. But believe us when we say this – The phone’s beauty is on the inside and it’ll make your eyes pop. 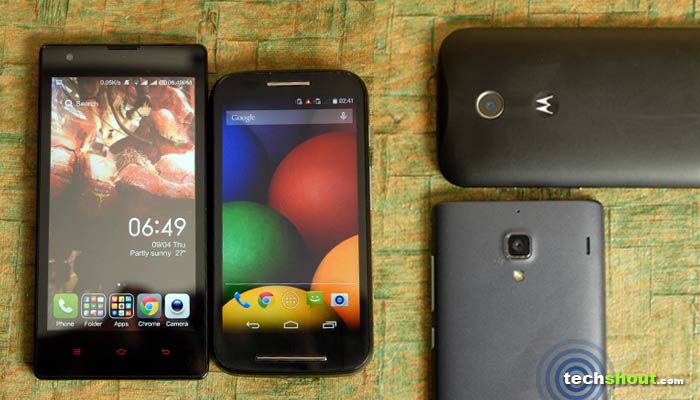 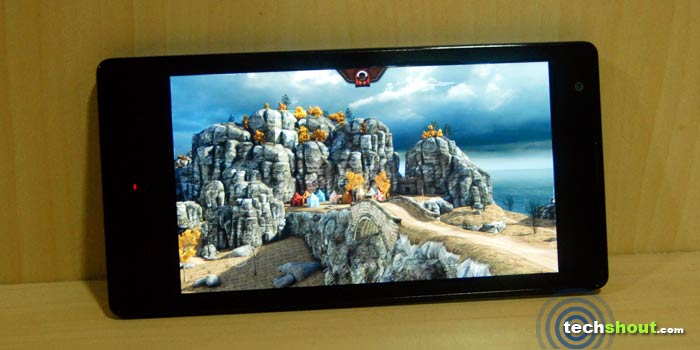 The 4.7-inch display on the Xiaomi Redmi 1S is one of the phone’s biggest selling points. No other smartphone under Rs 6K offers 1280 x 720 pixel resolution, that too on an IPS panel. And as we mentioned above, there’s a coating of Dragontrail glass which is certainly not the best compared to Corning’s Gorilla Glass 3 found on the Moto E, but it has some pretty good resistance to scratches and scuffs.

There’s a lot to boast about the display – Firstly, visuals are great and not far from perfect. You also get a good dose of pixels as the density count is 312ppi. Being an LCD panel, colors are reproduced accurately with no excessive saturation. But the brightness is a bit of a letdown. While the phone allows you to dim the screen to a great extent which is good for reading in the dark, outdoor visibility is poor even at full brightness. 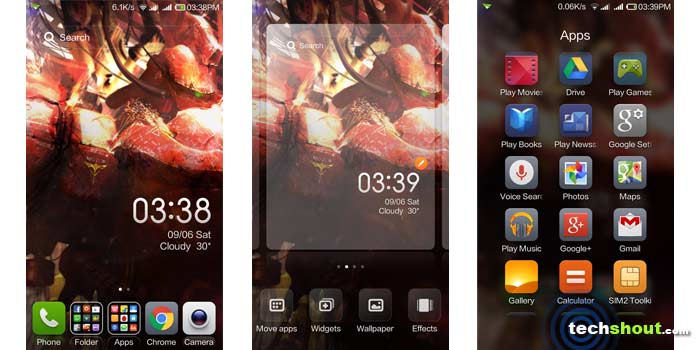 Xiaomi phones run on Android, but they come with a custom UX that overhauls the entire interface. Like Samsung’s TouchWiz, the Chinese giant has MIUI, version 5 in this case. OEMs normally don’t tend to stray far away from the core Android experience, but not Xiaomi. Its custom interface is quite different from what you’d find in other smartphones powered by Google and it has an alien-like feel to it, not to mention the obvious iOS-inspired look.

As lovely and fresh as it may look, there isn’t much to it in terms of menus and navigation. You get a simple UI with no app drawer and all of your installed stuff will be shown on the home screen itself. Yes – It can get pretty messy, but there’s always the option to add unwanted icons to folders. And you’ll probably never get tired of the interface with the sheer number of downloadable themes available which modify almost everything from fonts to icons to sounds to the dial pad to even the boot animation. 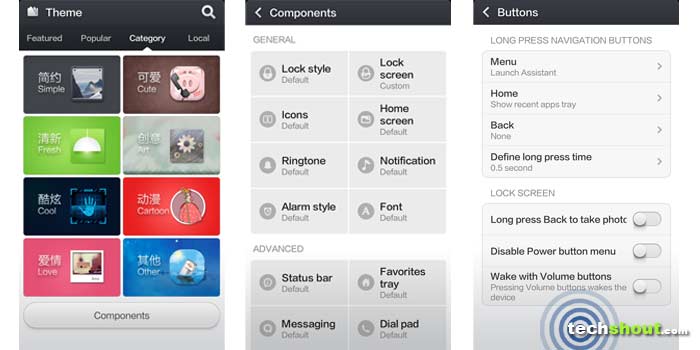 MIUI is basically a love-hate relationship – It’s a visual treat and there’s so much eye-candy here, but it can get frustrating to understand at the start. Fortunately, there are many alternative launchers available in the Play store and MIUI makes it easy to switch between them thanks to a dedicated menu for setting the default desktop. Xiaomi says that an update to MIUI V6 is in the works and it should arrive by the end of the year along with Android 4.4 KitKat.

So far, we’ve concluded that the Xiaomi Redmi 1S has a great display, alluring specs, a fresh UX and somewhat of a mediocre design. But how well does all of these aspects work when put together? We’ve gotten to the bottom of it – On moderate usage, we’ve found that the smartphone’s rear, around the camera area, would heat up pretty quickly. Fortunately, it doesn’t intensify on continuous use or even switching to heavier tasks.

Since there’s just 1GB of RAM, around 300MB is usually free depending on how many apps are running in the background. This causes a few demanding titles to force close due to low memory, but a restart every once in a while prevents the issue. Even with the extra effects and blurred backgrounds, the UI still manages to work smoothly with little (only at start-up) to no lag. 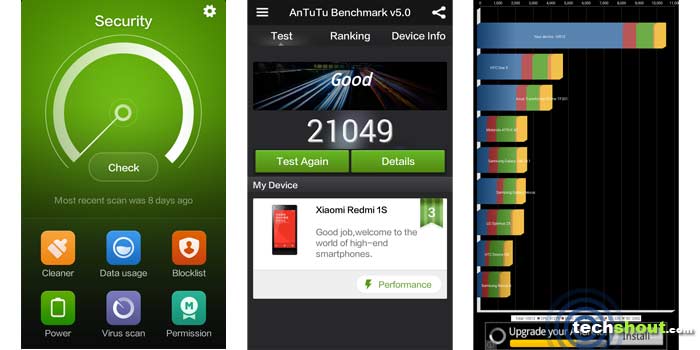 The display is pretty responsive as well, and apps launch immediately after taping them without any sort of delay. Almost everything we threw at the phone (except for a few memory related crashes) worked smoothly. We even put it through its paces in demanding games such as Real Racing 3, Asphalt 8 and Epic Citadel which is used for benchmarking purposes as well. The outcome was nothing short of satisfactory as everything worked smoothly and graphics looked as good as you’d get on mid-range phones.

For those who prefer benchmark numbers, we’ve run the device through some of the most popular tools on the market. Compared to the Moto G (2013) which scored 17503 in AnTuTu and 7949 in Quadrant Standard Edition, the Redmi 1S managed to achieve 21049 and 10161 points, respectively. We’ve skipped the other tests mainly because they focus on performance-driven phones.

The Xiaomi handset comes with a 2000mAh battery which is user-replaceable. This means that you can carry along a spare on long outings without worrying about running out of juice or hunting for a wall outlet. Another benefit is that the cell can be replaced easily when it wears out and you won’t incur heavy expenses.

The Chinese OEM hasn’t provided any estimates on how well its battery can hold up, but we’ve put it through our usual tests and the results aren’t anything out of the ordinary. On typical everyday usage, you can expect to get a little over 7 hours of activity which is pretty decent. And in our video look test where we played a 1080p FHD movie on loop, the phone only managed to pull through for 5 hours. You could get better results with lower resolution videos. 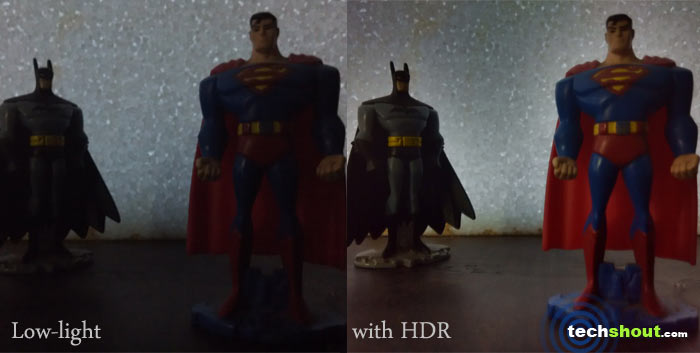 Xiaomi hasn’t held back in delivering great quality hardware and it hasn’t made any compromises on the cameras either. The front sensor is a 1.6MP lens which works as you’d expect in well-lit conditions. Images look good and videos are smooth, so there should be no worries during face-to-face calls. The rear snapper, on the other hand, is an 8MP Sony Exmor R sensor that delivers acceptable results in dimply-lit areas. As you can see in the above sample image, the phone offers decent images under less lighting sans any excessive noise and even better results with HDR turned on in such situations. 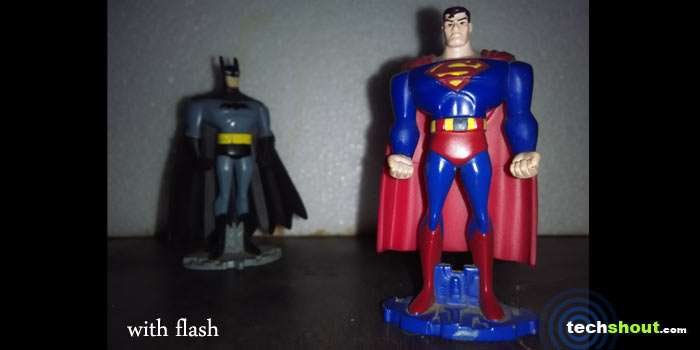 We were even impressed with the LED flash as it didn’t overexpose shots and provided a good amount of light to derive clear pictures. Video recording at 1080p FHD is smooth as well, but it isn’t the best we’ve seen from an 8MP sensor. Well, for what you’ll be paying, it’s totally acceptable. Coming to the camera app, the UI doesn’t offer much in features, but a simple layout that’s not at all hard to understand and there’s a Simple Mode which makes things even more intuitive. 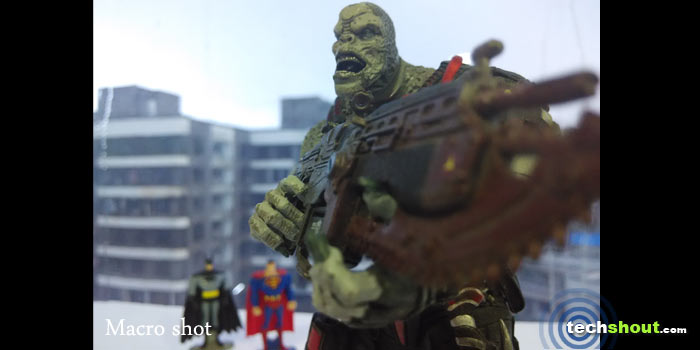 Audiophiles are definitely going to enjoy listening to music on the Redmi 1S as the Dirac sound enhancement delivers a delightful audio experience when combined with a good paid of cans.

You certainly won’t find such good hardware on any other device in the same price range.

The display is the best part of the 1S as it delivers crisp visuals and good viewing angles.

As great as the display is, it would help in outdoor visibility if the brightness levels were increased.

MIUI can be hard to understand for someone new to Android or experiencing it for the first time.

The Xiaomi Redmi 1S makes the perfect smartphone for first-time buyers and even those who want performance at a very affordable price. It even puts up a good show against the Moto E which is the handset’s biggest competitor and undoubtedly one of the best smartphones under Rs 10K. At Rs 5999, this phone is practically a steal, but good luck at getting your hands on a unit. For what it’s worth, the phone deserves a 4.5 out of 5 rating.