After dethroning bigwigs from the smartphone business, Xiaomi is now ready with its new pet project which involves home automation with the help of a few smart home accessories. They include a color-changing smart bulb, a wide-angle webcam and more, but while they’ve only been revealed at the moment, don’t expect an official release anytime soon.

That’s because these products from the Chinese company have only been launched for beta testing. So there’s no mention of their pricing details, but judging by Xiaomi’s usual practice, they will most definitely be priced lower than their contemporaries to better compete with them. 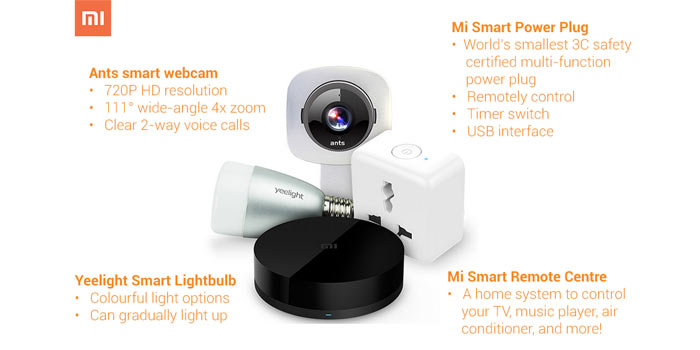 First among the new home automation accessories from the company is the Yeelight Smart Lightbulb. Like most other similar products out there, this one too lets you change its colors using your smartphones or tablets. Moreover, you can even set a timer to turn it on or off whenever you wish to.

The second product from this range is the Ants smart webcam. Capable of capturing 720p HD videos, this device has been equipped by Xiaomi with a wide angle lens to increase its field of view.

The Mi Smart Power Plug is another interesting accessory in this range, as it offers a USB interface, while letting you set timers for its functions and even control it remotely. The last such product is the Mi Smart Remote Centre which acts as a hub for controlling home equipment like the TV, the air conditioner and more.

We don’t know exactly when Xiaomi’s home invasion is supposed to begin, but now that these products have entered beta testing, it wouldn’t be a bad idea to expect them to arrive in the coming months.