Along with announcing the summer availability of Windows 10, Microsoft also revealed that Xiaomi and Lenovo will be its latest partners to develop smartphones based on the platform. What’s more, there’s confirmation from the company that the upcoming OS is being ported over to the Mi4 handset for testing.

With Xiaomi and Lenovo as hardware partners, Microsoft can concentrate more on pushing into the Chinese market where Android is the key player. This will also promote Qualcomm chipsets in the country where MediaTek has created quite the stronghold, that’s unless the Redmond giant partners with the latter chip maker as well to support its Windows 10 OS. 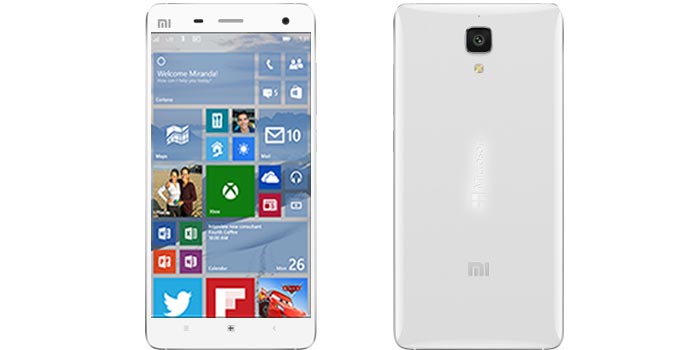 With Xiaomi, Microsoft has created a new program where a bunch of lucky Mi4 users will be able to download the Windows 10 Technical Preview OS onto the smartphone and help test the software for release in the future. They will be providing feedback directly to Microsoft and it doesn’t look like the platform will be made available as an update to everyone.

Coming to the new Lenovo Windows 10 device, there are no concrete details as yet. And it doesn’t look like the hardware is finalized as Microsoft revealed that the phone will be a mid-range release with a 4.5-inch to 5-inch display and either a Snapdragon 400 or Snapdragon 600 processor (probably even the newer 64-bit versions).

The Lenovo smartphone should arrive by mid 2015 via China Mobile, while the Xiaomi Mi4 Windows 10 edition is expected to go on sale later this year.