Xiaomi Mi4 is ready to get unveiled on July 22

We’ve heard about the Xiaomi Mi4 through vague rumors and leaks, but there’s something official to reveal today. July 22 is the date on which the company, touted to be ‘China’s Apple,’ will most likely be unveiling this new flagship, clad with a metal body apparently.

A suggestive Facebook post (via BGR India) from none other than Xiaomi’s CEO is the source of this new piece of information. It contains an image showing the number 4, which is proof enough to know that it signifies the Mi4. This picture also contains the date July 22 and moreover, teases that the smartphone will be made from metal. 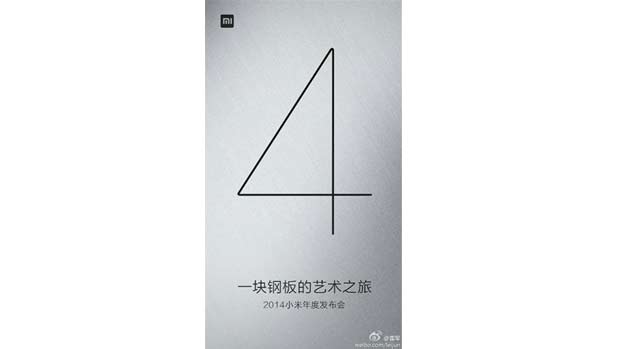 Xiaomi CEO Bin Lin talks about this annual unveiling event by saying that it will tell the story of ‘the journey of a piece of steel metal.’ This new flagship is expected to contain a host of advanced offerings, prime among those being a large 2K display, a Snapdragon 805 processor and 3GB of RAM.

This will make it a hefty update over its predecessor which was launched in India recently. The Xiaomi Mi3 runs the Android-based MIUI OS and carries onboard the advanced Qualcomm Snapdragon 800 chipset, apart from 2GB of RAM. Priced at Rs 14999, it kicks in a 13MP rear camera and a 2MP webcam.

Here’s a neat look at the specs of the Xiaomi Mi3:

Let us now wait until July 22 and find out what the company has in store for us with the Xiaomi Mi4.