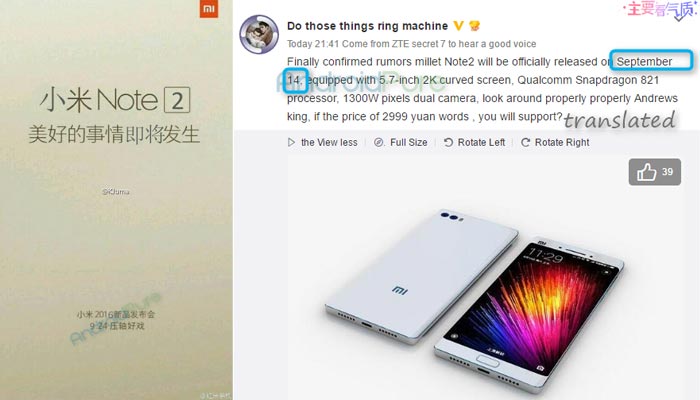 Xiaomi’s highly-anticipated Mi Note 2 is almost upon us going by a new leak which alleges that the handset is coming out next week. September 14 to be precise; though a separate leak claims that the launch is actually taking place on September 24.

There’s no way to tell which source is accurate as of now. The September 14 date for the Xiaomi Mi Note 2 comes courtesy a Weibo user’s post (right), while the September 24 one arrives in the form of an official-looking teaser poster (left). The latter seems most likely given its authentic-looking design. However, images like this are easily faked and should always be taken with a pinch of salt.

Whenever it’s coming out, the Mi Note 2 is set to create quite a ripple with a long list of impressive top-of-the-line specs. The Weibo poster asserts that the smartphone will be powered by Qualcomm’s latest Snapdragon 821 processor, sport a 13MP dual-camera setup, and feature a 5.7-inch dual-curved display.

The sloping screen is definitely one of the major headline-grabbing aspects of the Xiaomi phone. Previous reports have alleged that the panel has been crafted by Samsung and outputs an OLED QHD resolution. Other rumored specs include 6GB of RAM, a 3600mAh battery, 128GB of internal room, USB Type-C connectivity, and a fingerprint scanner.

The Mi Note 2 is expected to be vended in two variants. One could feature the QHD arced panel mentioned above and the other a 1080p standard flat display. The second may also contain a lesser 4GB of RAM and a slightly slower Snapdragon 820 SoC. Xiaomi might price the former at CNY 2699 (approx Rs 27000) and the latter at CNY 2499 (about Rs 25000).