The Mi Mix 2 came out in September last year and it looks like its successor might be arriving at around the same time. The Mi Mix 3 has a lot to live up to now that bezel-less smartphones are the norm. Xiaomi will have to do something special to help it stand out from the crowd.

A new set of photos hint at just that. The images originally emerged on Weibo before getting shared by ITHome. They’re supposed to be renders of the Mi Mix 3, but it’s difficult to tell how authentic they are since there’s very little verified news about the handset. 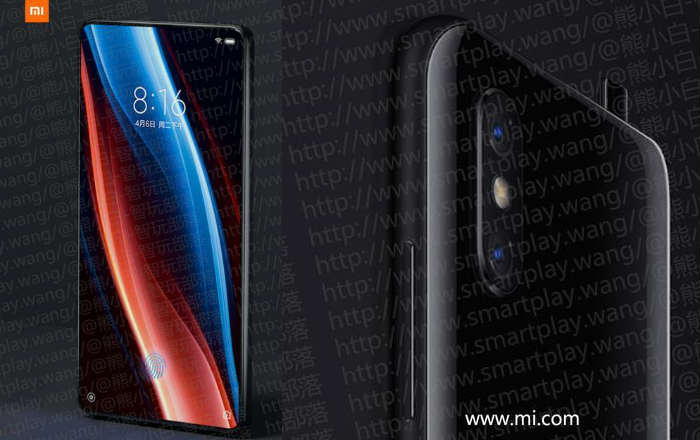 Going by the leak, the Mi Mix 3 will completely abandon bezels in favor of a full-screen design. Even the bottom chin has disappeared and taken the selfie camera with it. The lens appears to have relocated to a pop-up module inside the smartphone.

Vivo did something similar with the Nex S, so it’s certainly possible Xiaomi will as well. The latter actually patented a pop-up front-facing camera design back in 2015, so it’s clearly been working on the idea for a long time. The snapper notably has an LED flash module alongside it to light up photos in the dark.

The other big change expected in the Mi Mix 3 is an under-display fingerprint sensor. There’s a fingerprint graphic on the screen to hint at this possibility. The brand’s Mi 8 Explorer Edition notably has a pressure-sensitive in-display scanner.

It would make sense for Xiaomi to carry forward the tech to its next premium smartphone. The Mi 8 Explorer Edition also comes with support for 3D facial recognition, while the regular Mi 8 makes do with an Infrared face unlock tool.

It’s not clear if Xiaomi will opt for either tech in the Mi Mix 3. Stay tuned for more on the smartphone as the weeks go by.