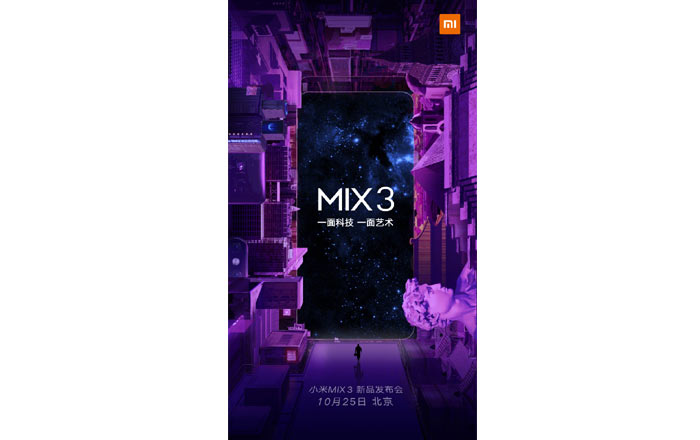 Xiaomi has finally announced when the Mi Mix 3 is going to make its debut. The brand took to its Weibo page to confirm that the phone will be coming out on October 25 at an event in Beijing.

The poster accompanying the Weibo post shows off the bezel-less design of the Mi Mix 3, alongside famous works of art and monuments. The handset isn’t a huge mystery at this point since Xiaomi itself revealed a hands-on look at the device a few months ago. It was promoting the device’s 5G abilities, making it one of the first 5G-ready smartphones to come out into the world.

Xiaomi has reportedly installed a sliding camera mechanism at the back of the phone to make sure there aren’t any interruptions at the front. It sounds similar to the Oppo Find X, but there may be one big difference between the two.

The Oppo handset has an automatic sliding camera, while the Xiaomi one reportedly has a manual one. We’re not sure why the brand would force people to move the back up and down every time they wanted to take a selfie since that sounds pretty annoying.

It’s possible this rumor won’t turn out to be true. There’s also said to be a dedicated Xiao AI button on the side of the Mi Mix 3. The voice assistant is only around in China though, so the key will probably get repurposed to perform some other function in foreign markets.

As per Playfuldroid, the Mi Mix 3 will probably run on the Snapdragon 845 processor. 8GB of RAM is probably going to be present to help run things. The screen’s dimensions aren’t public knowledge yet, but it’ll likely be an AMOLED display. Like the Mi 8 Explorer Edition before it, the device might have an under-display fingerprint scanner.